Like us on Facebook, follow us on Twitter! Check out our new tumblr page. :)
Manga News: Toriko has come to an end; but be sure to swing by and share your favourite moments from the series!
Manhwa & Manhua News: Check out the new Manhwa and Manhua shout-out (March 2016).
Event News: One Piece Awardshas concluded. Check the results Here!
MangaHelpers > News > Site News > MangaHelpers Strengthens the Borders
Homepage
Details
Archives 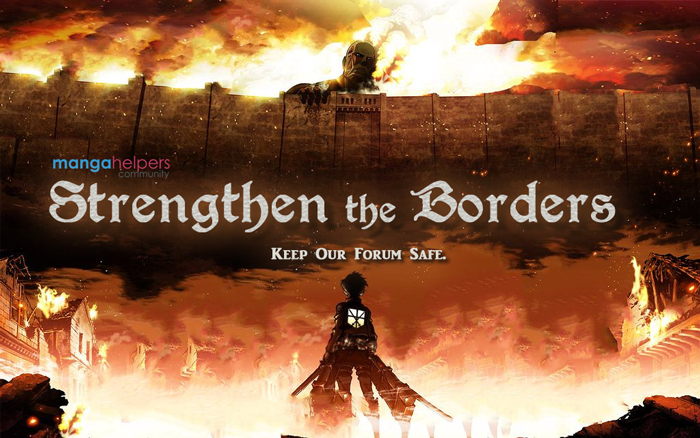 Other manga forums have taken great strides and become tippy top in the past year. In an attempt to improve the quality of discussions in several of our sections and become tippy top ourselves, MangaHelpers has decided to tighten security and perform checks to guarantee that only true fans of each series are able to view and post in threads.

To prove that you are worthy, you will need to show your knowledge and dedication by figuring out the password of each section you want to access. We have prepared walls only the greatest fans will be able to climb.

Boku no Hero Academia
Find ten hero names in the word puzzle below. The first letter of each name in alphabetical order composes the password. 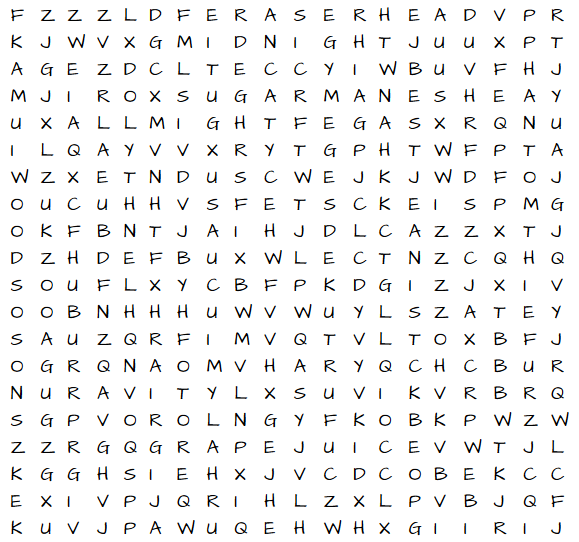 Fairy Tail
The last of the 7's

Nanatsu no Taizai
If you wish to proceed, then in this trial you must succeed:

I’m a vicious beast like no other
Perhaps I’ve even eaten someone’s father
Shall you try to threaten me
I will make you look like a little bee
Pork meat drives me crazy
And my master’s sin is being lazy
For the size of my enemy I have never cared
Although I do admit, of one “dragon” I was scared
I have the ability to create a portal
But unlike Ban, I’m not immortal
I do not normally possess a regular eye
Now it’s your turn to guess – who am I?


New Prince of Tennis
Answer the following questions and use the letters indicating the correct answers to form the password.

3. Which of the following is not one of Tohno's Execution Methods?
h) Shooting, e) Columbian Necktie, u) Stoning, f) Electric Chair

7. How many fingers does Tokugawa use when doing a handstand?
e) One, i) Three, b) Five, r) Ten

10. What is Byoudouin bad at?
n) Crying Children, j) Carbonated Drinks, s) Nothing, a) Insects


Shingeki no Kyojin
From left to right, guess the character in each panel. The first letter of each name composes the password.

Tokyo Ghoul
At the start of his trip, he is a newborn - fresh, open and spontaneous. On setting out, he immediately encounters the Magician and the High Priestess. As he grows, he becomes more and more aware of his surroundings. As with most babies, he first recognizes his mother, the Empress. The next person he encounters is the father in the figure of the Emperor. Eventually, he ventures out of his home into the wider world.

He is exposed to the beliefs and traditions of his culture and begins his formal education. The Hierophant represents the organized belief systems that begin to surround and inform the growing child. Eventually, he faces two new challenges. He experiences the powerful urge for sexual union with another person. Before, he was mainly self-centered. Now he feels the balancing tendency, pictured in the Lovers, to reach out and become half of a loving partnership. He yearns for relationship.

Over time, life presents him with new challenges, some that cause suffering and disillusionment. He has many occasions to draw on the quality of Strength. Sooner or later, he is led to ask himself the age-old question "Why?" He becomes absorbed with the search for answers, not from an idle curiosity, but out of a deeply felt need to find out why people live, if only to suffer and die. The Hermit represents the need to find deeper truth. After much soul-searching, he begins to see how everything connects. He has a vision of the world's wondrous design; its intricate patterns and cycles. The Wheel of Fortune is a symbol of the mysterious universe whose parts work together in harmony. When he glimpses the beauty and order of the world, if only briefly, he finds some of the answers he is seeking. He must now decide what this vision means to him personally. He looks back over his life to trace the cause and effect relationships that have brought him to this point. He takes responsibility for his past actions so he can make amends and ensure a more honest course for the future.

The demands of Justice must be served so that he can wipe the slate clean. Undaunted, he pushes on. He is determined to realize his vision, but he finds life is not so easily tamed. Sooner or later, he encounters his personal cross - an experience that seems too difficult to endure. This overwhelming challenge humbles him until he has no choice but to give up and let go. He feels suspended in a timeless moment, free of urgency and pressure. In truth, his world has been turned upside-down. He is the Hanged Man, apparently martyred, but actually serene and at peace. He now begins to eliminate old habits and tired approaches. He cuts out nonessentials because he appreciates the basics of life. He goes through endings as he puts the outgrown aspects of his life behind him. He process may seem like dying because it is the Death of his familiar self to allow for the growth of a new one.

Whose journey is being described?

69 members and 64 guests have thanked Kaoz for this news

[Permalink]
What is this?

[Permalink]
April Fool's, amirite? Anyway, the PW for Nanatsu is pretty easy to figure out.

[Permalink]
I don't understant, is an April Fool's Joke or What?

Well I really not Understant that qestion

[Permalink]
I guessed a lot of things from King Bileyger to the fool's journey.... ughhhhh why on spoiler niiiiight.
TT - TT
(y do u enjoy my pain and suffering?)

[Permalink]
I think I got the FT one, but seriously, I can't be sure with what we've got. Disappointed.

[Permalink]
What the hell is this? Has the forum been hacked or something?

[Permalink]
Sigh....After readin TG, I was getting pissed..The info is almost too in depth. Not everyone reads that deep into manga, nor can they remember every name on demand..April fools tho, real cute

[Permalink]
What is going on?? and what is the last of 7 in FT? Nice work for April Fools day.

[Permalink]
admins, are you ok? Too many people here from different countries and I'm not so good at English to translate the password of the Tokyo ghoul. I honestly can not know who this is.

[Permalink]
Wow.... Nice April's fool... Still though, the Fairy Tail's one is too confusing... I thought it could be Dragon Slayers, but how to write it correctly?? The question is way too vague....

[Permalink]
*wakes up with 7% on his phone, wants to check MH before it dies*

*gets answers wrong even Googling*

*Cries and posts this out of the NPoT area, just before the phone dies*

[Permalink]
Hardy, seriously? I thought these were all really easy questions. I will say this much though, they're not in the correct order.

[Permalink]
The Boku no Hero one was fun.

[Permalink]
Kaoz, crap I didn't notice they weren't in order. I thought it was the name of some random chatroom, lol.

[Permalink]
im not a native english :(
somone can give me the PW for Nanatsu no taizai please!
:(

[Permalink]
it seems like i'm not the real fan of those manga above, because i didn't even know the answer lol... but Fairy Tail section please gimme a hint for those who has succeed cracked the code, and it is not "the dragon slayers"

[Permalink]
I found the password for the code morse in Yakusoku no Neverland, but I still can't enter.

[Permalink]
Konja9: Passwords are case sensitive, so if you think you got it try some sensible variations.

[Permalink]
someone give me pass for tokyo ghoul plzzz

[Permalink]
This is a pretty funny April Fool's joke: But it's almost cruel in a way because I read Fairy Tail, Nanatsu no Taizai, Tokyo ghoul, AND Boku no Hero Academia. At least the Nanatsu no Taizai code was easy enough haha.

[Permalink]
The Fairy Tail question is so easy of course I am dying here just to figure out the password.

[Permalink]
I got the Tokyo ghoul one, but the password isn't working. I have the feeling that even if you do have the answer it's not going to work.

[Permalink]
OMG, i bet Tokyo Ghoul password will be a real pain to find for most people,lol

[Permalink]
I got the answer for Fairy Tail, but we got all pranked and nothing will work. ^-^

[Permalink]
this is the wotst joke i`ve ever seen

[Permalink]
I bet the authors of this mess are sitting there, laughing at us.

[Permalink]
No, i dont know about the others but there is a right answer for TG, im in the forum right now and a few others have posted there already too.

[Permalink]
I see you there trying go B
You really think your turret gonna keep you safe from me
7,000 hit points and i'm only lvl three
Feeding on a bunch of noobs, It's like i'm buying shit for free

Guess who is this :)

[Permalink]
Wow this is the biggest troll ever

[Permalink]
What is happening?

[Permalink]
The Fairy Tail one was the easiest.

[Permalink]
They told you the answer.

[Permalink]
@Debonair Raven, I have no reason to ask for the answer of such lousy riddle. All I need is my passion for Fairy Tail. That is my sin.

[Permalink]
You're an ex mod

And only mods are replying in FT section atm.

It's not fun to tease the ppl around you know!

[Permalink]
@Debonair Raven, such perception and deductive skills. How come you didn't solve the FT riddle, yet? I would like to discuss with you.

[Permalink]
Who told you that i don't know the answer? xD

[Permalink]
@Debonair Raven, kudos to you! I knew you could solve it. Never doubted your abilities. You make Mavis look like Mavis.

[Permalink]
It's for April fool or permanent?

[Permalink]
OMG what is this, April Fools? I sure do hope so cause no matter what I put to get to the Fairy Tail they be wrong

[Permalink]
Umm I keep typing Hawk for Nanatsu no Taizai password but it isn't working WTF??

[Permalink]
@The Sin of Hype Because it's not Hawk. Read it carefully, it's pretty easy.

[Permalink]
I give up with the NPot word. I cant understand the result :(

[Permalink]
@Debonair Raven do you know the FT one?

[Permalink]
@Debonair Raven, oh stop it, you make me blush. :3

[Permalink]
I wanted to solve the riddle for the snk one but it makes no sense :(

[Permalink]
really !?
do you know there are other forums !?

[Permalink]
I give up.

I'm having too hard of a time because of my disability's.

Hopefully I can get in normally tomorrow.

1. Which school did Mouri attend before transferring to Rikkai?
n) Shitenhouji

2. Who is Ochi known as?
e) Mental Assassin

3. Which of the following is not one of Tohno's Execution Methods?
u) Stoning

5. How many rackets can Ohmagari wield?
t) Two

6. What presents does Santa Oni bring?
i) Wooden Toys

7. How many fingers does Tokugawa use when doing a handstand?
i) Three

8. What is the name of Duke's younger sister?
_) Chloe

9. What is Tanegashima afraid of?
e) Planes

10. What is Byoudouin bad at?
s) Nothing