Like us on Facebook, follow us on Twitter! Check out our new tumblr page. :)
Manga News: Toriko has come to an end; but be sure to swing by and share your favourite moments from the series!
Manhwa & Manhua News: Check out the new Manhwa and Manhua shout-out (March 2016).
Event News: One Piece Awardshas concluded. Check the results Here!
MangaHelpers > News > Manga Reviews > Chapter Review: Edens Zero (17)
Homepage
Details
Archives 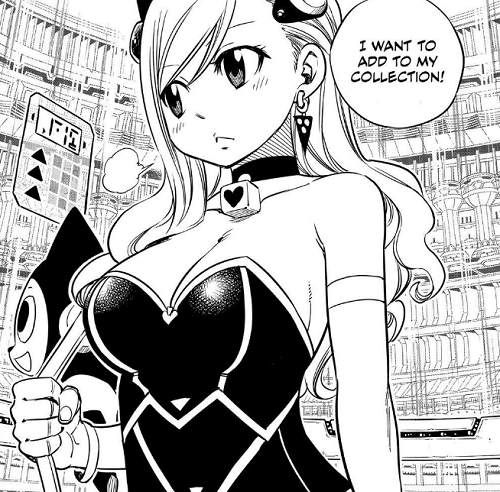 I'll say this for Dirty Kermit. The guy's got taste.
​

Our adventure picks things up back at the guild where Rebecca, Shiki, and company are finishing up their meal while she gets increasing nervous about the prospect of meeting the guild leader; which is evidently pretty unusual. Shiki wants to come along but Rebecca turns him down and heads off with Happy to her meeting and promises to ask the guild leader about "Sister". This leaves Shiki and Pino to go in search of their own fun so they decide to go exploring.

Shiki runs around with his usual enthusiasm but quickly notices that, unlike him, Pino pretty much knows what everything. Which sort of dampens Shiki's spirits a bit but he perks up and they go in search of a Plue which is something Pino doesn't know about and, despite Pino's best efforts, they quickly get lost. XD

Meanwhile, Lavillia's confidence in her situation dissolves when her mysterious attacker easily disables her guards. When she asks him what he wants he reveals he's there to take her. She tries to resist but things aren't looking good when Shiki appears and grabs the attacker from behind by his forearm and, in true gentlemanly fashion, informs the strange guy that he's making the girl uncomfortable.

Things don't end that easily though because the arm detaches and rocket punches at Shiki. Pino then analyzes Mr. Rocket Arms revealing that he's a cyborg. As the cyborg retreats a bit from Shiki, Lavillia pleads for his help. Shiki tells he couldn't care less about her but doesn't like letting bad guys get away with stuff either. Adding that his grandfather told him that helping someone in need is the first step to connecting one heart to another (The words of a future Harem King!!!). Naturally, this hits Lavilla right in the love-love zone.
Pino adds her heart is connected to Shiki's too. (So cute!)

Shiki and the mysterious kidnapper exchange some classic pre-battle banter and the kidnapper activates an ether gear. Shiki does the same with his as Lavilla starts recording.

Elsewhere on a planet called Guilst. We see an ugly frog man surrounded by stone statues of beautiful girls demanding more and more girls. A weird butler looking alien tries to calm this "Master Illega" and informs him that they have begun a large scale B-cuber hunt. And that Sister's soldiers are assisting. Dirty Kermit declares that he can't wait too add more to his collection we get an ominous panel of Rebecca in the background. 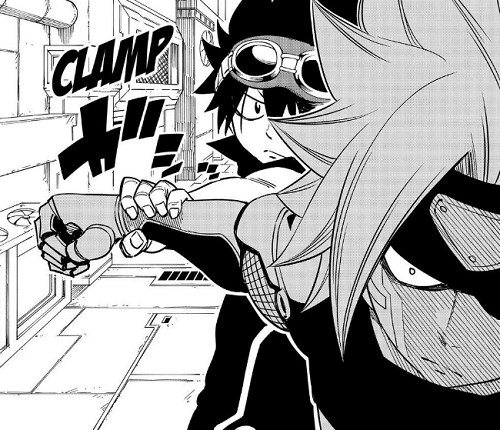 We didn't get a lot to work with this week. Or not as much as previous weeks anyway. We identified the main villain of this arc in Kermit the Pervy Frog and that Sister is hiring her people out to him for some reason. Which will likely be a source of some conflict later. Shiki's not going to care for any part of this. Which is fine. Dirty Kermit seems like a very hate-able villain to me so I like that. The fact that he's on a whole other planet is interesting though, it suggest that Shiki is going to end up leaving Blue Garden to end this.

What I liked more than that, however, was Shiki's monologue about connecting hearts. It shows two things I really want from my shonen protagonists. The first is a philosophy. A hero can punch bad guys all day long but it will never mean much until we understand why he's doing it and establishing and foundation of beliefs. The second is that it doubles down on the idea of Shiki's seeking connections with people. That he's thinking about connecting hearts suggests that he's not just looking for shallow friendship but a truly deep bond. That Mashima had Shiki even considering that kind of thing is very very promising.

Nothing amazing here. It's a pretty classic setup chapter. Pacing was on the slow side but acceptable. Probably could have moved faster but it would have lost the relaxed feeling of Shiki and Pino's exploring. It's a chapter that's written to build momentum and it does that but it's not nearly as satisfying as some of the other chapters we've had recently.

The artwork good. No big two page spreads but some very expressive facial work. Particularly, Lavillia. Her range of emotion in this chapter was pretty great. She goes through a different emotion in almost every panel she's in and they all were pretty vivid. That's pretty hard to do. Consistent background and character detail work too. Nothing outstanding but consistently good.

A setup chapter that didn't have the flashiness or big revelations we've been getting from so many recent weeks. It did what it set out to and did it well enough but didn't quite do enough to stand out.