Like us on Facebook, follow us on Twitter! Check out our new tumblr page. :)
Manga News: Toriko has come to an end; but be sure to swing by and share your favourite moments from the series!
Manhwa & Manhua News: Check out the new Manhwa and Manhua shout-out (March 2016).
Event News: One Piece Awardshas concluded. Check the results Here!
MangaHelpers > News > Manga Reviews > Chapter Review: Fairy Tail: 100 Years Quest (13)
Homepage
Details
Archives

Recently in Fairy Tail: 100 Years Quest, Team Natsu were on their knees, Jellal and Laxus were about to go at it, and a former enemy(?) rocked up in the middle of the ocean just in time to save Gray. Chapter 13 gave us answers and non-answers to those, and then some.

Brandish commanded panels with chic and elegance as we’ve come to expect from her. She filled some info gaps, offered a look to the future, saved the day for the second time that day, and then that cosy blanket of fresh air left us as quick as she came. 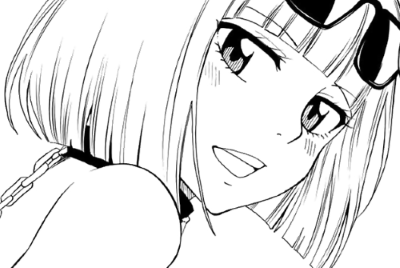 The gaps, specifically, were about the remaining living Spriggan 12 members. Apparently Ajeel wised up and became emperor; Jacob his right hand man. So, can the Savage Six take Alvarez? Invel and Neinhart being locked up made me laugh; means Ajeel and Jacob beat ‘em? I enjoyed the change of scene for DiMaria. She’s happy, and doing something that her crazy powers can’t help her out with. Then again, it does appear too far away from her previous characterisation, which is a little jarring. This was all done within one page in a brief manner, leading me to believe that this update is all we’ll get for them. Except for Larcade who was only mentioned as ‘unsighted’. Maybe he comes back, and delivers on that promise as a weapon for Acnologia; that or brace yourself for gasm spam.

More importantly, Brandish is on a quest, and at the end of it is Aquarius’ key. Other than the location, we’re only left with assumptions, and the short priced favourite is we’ll all go to Gilina eventually. The big question is who gets the key: Lucy or Brandish? Not sure who I would choose, but the logical way to handle this is for them to have Naked Battle - Round 2.

Brandish did refuse to fight, but provided the next best thing, a remedy for Natsu and Wendy’s inner ear problems. With practically no exertion, an entire island was generated from a mere pebble, grounding the slayers. The dragon eaters just got shiprocked. Now they’re going to get wrecked. There is no way Erza won’t destroy Kyria after all that (did I mention Erza was pretending to be humiliated?). The others won’t lose a second time either, Natsu is in that stance where you expect him to rage too.

Also, the "super-fight" didn’t eventuate. Laxus vs Jellal will remain, at least for now, perfectly perched in uncertainty. Just when you thought the time had come for the manga to put this long-running power debate to rest, guess what, you were trolled. The fight would’ve made less than 2 sense but from a pugilist perspective there was much to salivate. In my opinion, Laxus would’ve won in a fair fight. Last week, the FT section didn't seem to think so:

41 still in the darkness
After they parted ways, Jellal stayed in Magnolia, cutting a forlorn figure in the penthouse of the lavish Hotel Latham. He’s not leaving Touka, it’s clear there’s something amiss, there wouldn’t be build up for nothing (let’s give the story the benefit of the doubt here). She might not be evil – I mean, the FT guilds’ nakama detector is wrong when? Perhaps this is what Jellal is pondering over. It’d be nice for once if Jellal actually came through and put a case to bed, since he’s usually a presence to hype a situation, as seen with his investigations during the Grand Magic Games. And we know the results of that. Regardless, the boy needs to practice some tact and liaise with the guild directly. From there, the plot can move forward too.

Overall the chapter probably isn’t great if you go all assessor on it. In my eyes, this was a gift from the heavens. Rating: μ/κ


To discuss and share your thoughts on the manga, you can visit our Fairy Tail section.

1 members and 1 guests have thanked Kaoz for this news