Like us on Facebook, follow us on Twitter! Check out our new tumblr page. :)
Manga News: Toriko has come to an end; but be sure to swing by and share your favourite moments from the series!
Manhwa & Manhua News: Check out the new Manhwa and Manhua shout-out (March 2016).
Event News: One Piece Awardshas concluded. Check the results Here!
MangaHelpers > News > Shout-Outs > New Ghibli film out - The Borrower Arrietty
Homepage
Details
Archives 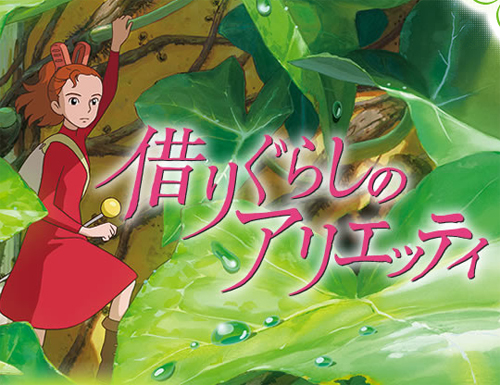 I just got back from watching the latest Ghibli film (Famous for Princess Mononoke, Ponyo on the Cliff, Spirited Away and many others), Karigurashi no Arrietti or in English, "The Borrower Arrietty". Arrietty lives in a world where humans are giants and Arrietty and her family have to "borrow" things from the giant world to get by. Sound familiar? It should, the plot was based on "The borrowers". Here's the trailer:


The animation of the film, like the cat that makes quite a few appearances, reminds me of My Neighbour Totoro. There are also times where it looks like it took influences from Ponyo and Kiki's Delivery Service. So in other words, it really doesn't bring anything new to the audience. But this can be expected seeing as the usual director, Hayao Miyazaki, wasn't directing it.

While the new director, Hiromasa Yonebayashi, didn't bring anything new he did do an amazing job with the music and sound. There is a scene where Arrietti goes into the kitchen of the humans for the first time and the use of various sounds of the house are so loud and dynamic that it really helps put things into perspective and shows just how small she really is. On the music side of it, Cécile Corbel, a harpist and huge fan of Ghibli, sent them a fan letter and her music and was chosen to do the music for this film! Not only did she play the harp beautifully, but she sings in both English and Japanese! (Though I'd say her Japanese was better than her English ;) ). Her video:


All in all, out of the 10 or so films I've seen from this studio, I'd have to say it's probably near the bottom in terms of how I feel about it. Maybe it was because it's a story I've heard so many times already, or maybe it's because the main characters weren't given much depth and the ending left me going, "Oh? That's it? It's over?" as I left the theater. But, hey, that's me. Perhaps your experience might be a bit better when it's released overseas in a year or two.

If anyone else is in Japan, check it out and leave your impressions in the comments! If you're not planning on coming to Japan for a few months, don't worry. Ghibli films tend to stay in the theaters for nearly a year.

[Permalink]
I recommend everyone to buy and collect all the anime from Ghibli... all of them masterpieces, many of them (if not all of them), have won very important prizes for their clean animation and storyline.

In the top of the anime world there's only one name Hayao Miyazaki, seriously, i know that I sound a little fanboyish, but his works are just awesome.

[Permalink]
If you'd like a bit of fresh air, check out mamoru hosoda's work like "The Girl Who Leapt Through Time" or "Summer Wars". These two'll blow your minds off. Miyazaki's really great but he's not the only one making good stuff ;)

[Permalink]
Oh, I felt nearly same!
I thought it was shorter than usual Gibuli movies, and had “Is- that-really-all?” feeling.

But, I liked the boy, Sho (or Shou?).
At first he seemed just "good and kind boy with poor health", but he was very cruel for a split second.
I thought he's new type in Ghibli!

Also, just my opinion, I think the harpist shouldn't sing... She has formidable skill though... as a harpist.

[Permalink]
I'm disappointed that Hayao Miyazaki himself wasn't directing it, but will look forward to watching it nevertheless.