Like us on Facebook, follow us on Twitter! Check out our new tumblr page. :)
Manga News: Toriko has come to an end; but be sure to swing by and share your favourite moments from the series!
Manhwa & Manhua News: Check out the new Manhwa and Manhua shout-out (March 2016).
Event News: One Piece Awardshas concluded. Check the results Here!
MangaHelpers > News > Manga News > Author of Long-Running Honobono Kun Passes Away
Homepage
Details
Archives 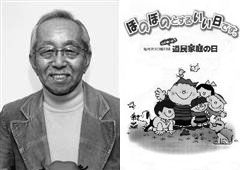 Manga author, Kimihiko Tsukuda passed away on the 28th of June of pneumonia, it was made public today. He was 80 years old.

His most-known series, Honobono Kun, ran from 1956 till 2007 and was serialised in the Tokyo Shinbun. In that time, there was an approximate total of 7 years break, but 44 years of serialisation is a very well-commended effort. Appearing a total of 15,451 times, the series set the record for most serialised appearances in a domestic newspaper. The second longest-running newspaper comic is the late Yoshiro Kato's "Mappira-kun," which ended on its 13,615th strip in 2001. At the time, Tsukuda-san could no longer continue the series due to ailing health.

[Permalink]
I can't say I've ever heard of this series o.0

[Permalink]
Didn`t read it but 44 years serialized manga is nice:p

[Permalink]
44 years is quite an amazing feat. I'm sure most people couldn't pull that off, especially into their late 70s. May he rest in peace.