Like us on Facebook, follow us on Twitter! Check out our new tumblr page. :)
Manga News: Toriko has come to an end; but be sure to swing by and share your favourite moments from the series!
Manhwa & Manhua News: Check out the new Manhwa and Manhua shout-out (March 2016).
Event News: One Piece Awardshas concluded. Check the results Here!
MangaHelpers > News > Site News > Winner interview: Trying to understand a Narutard with Jorp!
Homepage
Details
Archives

+ posted by Nii in Site News on Aug 8, 2012 23:51
Hello dear members of MH! Not too long ago we held the second edition of the Scavenger Hunt, which was organized for the members. I'm sure many of you still remember it :D Now here's the promised interview with the winner: Jorped
I hope you will enjoy reading it but before we start I would like to thank Bugzee, one of his teammates in the Scavhunt, for creating this wonderful banner!
Now let's get started: 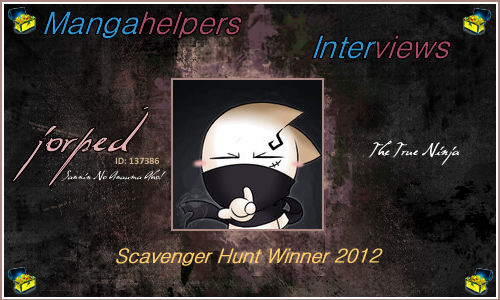 Hello jorped! Thanks for taking your time with this interview~

No problem, let's get started :D

What? There's actually people who dont know about me oO
....
time to stop joking xD

Hi everyone, so i am Jorped.But you might also call me Jorped-sama.
I don't really remember how i came to Mangahelpers, but back then Naruto was the only manga/anime i followed. After that many things changed and have opened myself to a new world. But be aware, Naruto is still my favourite, so you can also call me Narutard xD

Here, i have also meet a lot amazing people, and nowadays i spend a lotta time at FF section. In case you never visited, give it a try!

Indeed, the fun forum is an awesome place. Most people probably know you as a hardcore Naruto fan but I'm sure there are other manga you enjoy a lot! Is there anything coming close to your favourite?

Hmmm, even though I have entered in pretty tense "fights", about how Naruto it's better than One Piece, i gotta say that i also rate One Piece quite high ... I mean I wouldn't read 620 chapters in less than 2 weeks if it was boring xD.

Anyway, there's alot other mangas i follow, but these 2 are definitely the ones who most entertain me. Hmm but i guess Death Note and Slam Dunk also belong to my favourites, definitely 2 mangas that really showed how amazing their genre could be developed into

Sounds like some good choices :nod but enough about manga, tell us some dirty secrets about you, something no one knows yet ;D

Hmmm dirty secrets ... hmm nothing comes to my mind. But maybe something that always makes me outstand a bit, it's the fact that I have a twin brother.
Though he is not really into manga/anime world like me xD

Now that's not really dirty but definitely a surprise. I guess you're pretty close?

Yup. Nowadays we study at different places. He kept styding on our "home"' town
while I went to a different place xD but I mean, even though he is a jerk and a completely retard, I still like him :3c

Haha that's what I call a nice brotherly relationship XD

Okay let's get to the contest now because that's why you're here. How was the experience of the Hunt? You particpated last time as well so what do you think about the second edition?

Hmm it was as enjoyable as the previous and like the last one, it made us really went nuts xD ... it was an amazing event, which happened thx to the amazing work of our moderators. So in case there is a third edition plz sign in, you won't regret.

Glad to hear that, we thank all the participants too! You made this an amazing event :3
but regarding the Scavenger Hunt, your team was the only one reaching the finals, right? Were you surprised?

Hmm I was ... but we also struggled a lot in some rounds, especially on the last one. Was definitely a though day for us but happily we ended being able to solve all the riddles. But everything gets easier and funnier when you have awesome teammates like Bugzee and Lawlett.

Your team did a great job, without a doubt! You mentioned that the last day was especially hard so which day of riddles was the easiest/hardest to you? It looks like most teams had problems with the last day D:

Hmm, I will have to check the riddles now xD

No problem, I will wait XD

Hmmm the 20th riddle was definitely the hardest ... it was really difficult to find that place. It took quite some time and also luck, cuz even though we were almost sure we were on the right track, we weren't finding anything on our searches

Ah yeah, we imagined that would be tricky. Looks like no team besides you thought the answer might be hidden in an announcement, nice job there!

So what was the easiest day for you?

Not sure ... but i think we solved day 2 pretty fast. So i think it was the easiest day for us.

Well from what I can tell you went through most the riddles pretty fast, how did you feel after your team was split? How was it competing against your teammates?

It was definitely harder ... cuz when you have 3 people thinking on the same thing, we end helping each other and it's easier to find the answer, cuz even if one is stuck at one and didn't really thought of that specific thread to the answer for that specific riddle, he might be the one to solve the next ... we end complementing each other.

The team was split last year so I was already expecting it would happen again, that's why it wasn't a surprise. So i guess it was a normal feeling and maybe a bit funny in a certain way.
In the end I didn't really thought of competition, I was more focused on doing what I could, even though either Bugzee or Lawlette could be the ones to get first place.

It was definitely one of our strengths ...when you are having a good time everything becomes easier. I think it helped a lot we were having so much fun each day.

Having fun is definitely the most important thing but was there some kind of strategy you used?

Hmm I guess using the search option really helped us, just like google at some riddles. Then when we thought we were on the right track we just prayed that we found the specific post that was edited xD

So in the end it was a lot of luck huh? xP

Well I guess fortune favours the bold ;D
I see you chose „The true Ninja“ as your custom title, how did you come up with it? Probably related to your love for Naruto?

One of the reasons is definitely because i really enjoy Naruto but I guess I also choose it because I thought it would be a funny custom title xD especially cuz it would be something to expect from me since I am a Narutard :3c

So you're proud of being a Narutard even though Naruto got a lot of bad reputation lately?

There's nothing to be ashamed of. I mean it's something I really enjoyed and still do, and it isn't like my "passion" for it is prejudging someone so there's really no reason for me to hide my feeling towards it xD

As a fellow Naruto fan I agree with you (even though the war was rather disappointing so far). Let's hope Kishi will provide us with a good story for the rest of the war :D

Now let's get back to the hunt - would you like to have another contest next year?
And if yes is there something you would like to change?

Hmm yeah I agree, participation was a bit low this time :/ we thought it would be a good time to start but looks like for some reasons it didn't go so well. Is there anything you would suggest to get more people next time?

Maybe some publicity at the different manga sections ... I was once also a member that only followed some specific sections so i kinda missed a lot stuff happening at MH.

Sounds like a good idea, we will definitely consider that for next time! We probably should advertise it more

So we're close to the finish now and you have the chance to relay a message to all the Naruto fans, the haters, your family, pets or whoever else you feel like talking too!

I wanna thank every single member that makes MH such an awesome place, always with interesting topics and conversations. Also thank all FFers, they know who they are, for making that section so awesome. And i also thx my team and i can't forget to also thank you, Niichan, most epic narutard ever xD

Thanks jorp! XD Now as a final question - Do you think you we will meet here next time as well?

Hooo, let's see you try~ Okay that's it, thanks a lot jorped! This was naruto-niichan reporting live from the soon to open Narutard Entertainment Park..

17 members and 6 guests have thanked Nii for this news

[Permalink]
Jorped won, that's a surprised...:O
Just kidding, I knew you had it in you...somewhere deep in that narutard soul...or something like that <_<
but anyway,
CONGRATS!!!

[Permalink]
this howle interview should be invalid...You cant spell me incorrect and post it public.


Our team spirit was high, our team had fun and our team had the best strategy at the end of the day....randomly searching any possible related threads to the riddles/clues posted in each round. :derp

Seriously, we had a lot of fun and I'm happy that MH decided to have another scavenger hunt for the second consecutive year. Arigatou~ It only gets better and better. Hopefully, with a little more exposure in the other sections of the forum the next hunt will be even more spectacular! =D

[Permalink]
Jorped is a dirty cheater! I deserved to win!

[Permalink]
Do people actually proofread this thing?So many mistakes.. And no one cares about this naruto talk

[Permalink]
lawlette, why you hatin?