Like us on Facebook, follow us on Twitter! Check out our new tumblr page. :)
Manga News: Toriko has come to an end; but be sure to swing by and share your favourite moments from the series!
Manhwa & Manhua News: Check out the new Manhwa and Manhua shout-out (March 2016).
Event News: One Piece Awardshas concluded. Check the results Here!
MangaHelpers > Manga > Browse > Asatte no Houkou
Home
Chapters
Translations
RSS 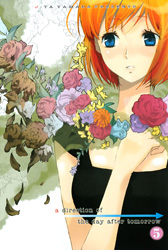 Asatte no Houkou follows the lives of Karada Iokawa, a young girl who is set to join junior high school after summer is over, and Shōko Nogami, a young woman who has just returned from studying abroad, who also happens to be the former girlfriend of Karada’s older brother.

The day Shōko returns, she is dragged by Karada to the beach with her brother and a couple of their friends since she used to know Karada’s brother Hiro several years before. After becoming irritated with Hiro for leaving her alone in the United States, she purposefully tells Karada that her ribbons are childish. This upset her greatly because she doesn’t like to be treated as a child.

Later that same day, Karada is found by Shōko praying at a shrine, wishing to become older. Amazingly, Karada’s wish becomes true and she instantly transforms into a young woman. Incidentally, Shōko then has her adulthood taken away from her and she reverts back to about eleven years old.