Like us on Facebook, follow us on Twitter! Check out our new tumblr page. :)
Manga News: Toriko has come to an end; but be sure to swing by and share your favourite moments from the series!
Manhwa & Manhua News: Check out the new Manhwa and Manhua shout-out (March 2016).
Event News: One Piece Awardshas concluded. Check the results Here!
MangaHelpers > Manga > Browse > Baccano! 1931 The Grand Punk Railroad
Home
Chapters
Translations
RSS 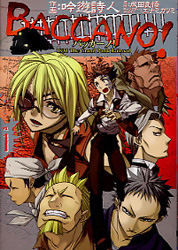 Based on a series of light novels.

"Baccano", which Narita translates as "stupid commotion", is Italian for "ruckus". Each of the stories in the series involves several unrelated plots intersecting and crossing each other as events spiral farther and farther out of control. Immortal alchemists, mafia operated speakeasies, and many other elements of pulp fiction mashed together for a world straight out of the movies. It all started 300 years ago on a boat where the alchemists summoned the "demon" in order to obtain the method of immortality. The demon gave the alchemist the liquor of immortality, the only way to die is to pass down the way to produce the liquor. But the following night, one of the alchemist started to devour his companions. To escape the threat, the alchemists scattered all over the world. In America during the temperance movement, centering around the liquor of immortality, the "stupid commotion" starts!