Like us on Facebook, follow us on Twitter! Check out our new tumblr page. :)
Manga News: Toriko has come to an end; but be sure to swing by and share your favourite moments from the series!
Manhwa & Manhua News: Check out the new Manhwa and Manhua shout-out (March 2016).
Event News: One Piece Awardshas concluded. Check the results Here!
MangaHelpers > Manga > Browse > Juushin Enbu
Home
Chapters
Translations
Thread
RSS 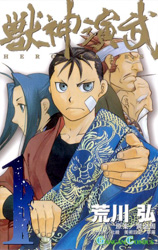 It is the time of wars. In the chaotic Empire, a group of seven heroes of the stars, the Hokushin-Tenkun, rose to lead the common folk. Out of the seven a destiny of heated battle unfolds between the "Two Noble Spirits", Hagun and Tonrou. Originally the two should not exist in the same time but the gears of Fate have turned otherwise. In the current feeble state of the Ken Empire, the conflicting "Two Noble Spirits" - Taitou Shirei of Hagun and Keirou of Tonrou each fight for their view of justice and the peace of the countires and their home country. In the name of Fate, the justice of whom shall prevail...?