Like us on Facebook, follow us on Twitter! Check out our new tumblr page. :)
Manga News: Toriko has come to an end; but be sure to swing by and share your favourite moments from the series!
Manhwa & Manhua News: Check out the new Manhwa and Manhua shout-out (March 2016).
Event News: One Piece Awardshas concluded. Check the results Here!
MangaHelpers > News > Shout-Outs > New Manga Shout Out: 3/17/14 - 3/23/14
Homepage
Details
Archives

Welcome to the next New Manga Shout Out. This weekly article introduces you to manga that are new and/or have not been scanlated yet. This week features a single father raising his daughter, short stories about boys in love and a hypocrite saving the world. Remember, if you like any of the series, favorite them. Don't forget to also thank the various people who feed your manga addiction. ^_^ Translators and Scanlators, please check out these series and see if you can spread some more manga love~ 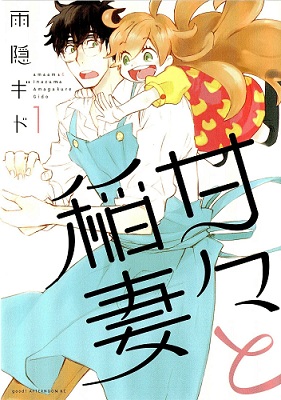 Inudzuka is a teacher who has been caring on his own for his little daughter, Tsumugi, since his wife's death. He's no good at cooking, so they've been eating packaged meals from the convenience store. A series of events lead him one evening to a restaurant run by the mother of one of his students, Kotori. Her mother isn't there, but Kotori does her best to feed them both. It turns out that Kotori is often alone, since her parents are divorced and her mother is frequently not around. The three of them begin to meet and cook tasty food together. 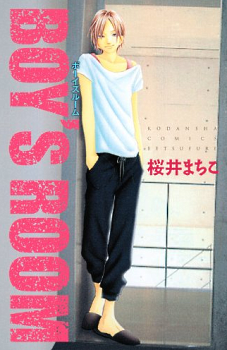 This manga contains four short stories about boys in love with girls. In Boy's Room, Taku has conflicting feelings about his older sister's friend, Aoi. In Je t'aime, Etsu's cooking skills may be insufficient to win the heart of the girl he likes. In Vintage, Ken is a popular guy, but he may have missed his chance with the girl he likes. In Baby Boys, Takasugi meets a girl who wants to be tough, but he sees her as a cute girl. 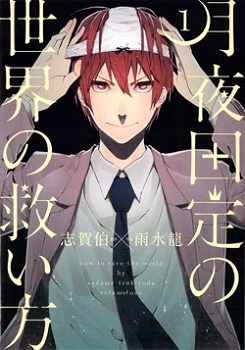 Tsukiyoda Sadame is a high-schooler and hypocrite who plans to use his charisma to take over the world. Through his machinations, he is able to become instantly popular as soon as he transfers into his new school, to the point where he's nominated as the class rep! However, there is another manipulator at work in his class, also trying to claim power: a girl named Kokoro.

While following her after school (totally not stalking her, though, nothing creepy), Sadame runs into a weird old man. It seems he's been getting "missions" on his smartphone, and if he doesn't complete them, the world will be destroyed. Soon Sadame is recognized as a "messiah" as well, and he gets his first mission-- to steal Kokoro's panties. Could these missions really be from God, and how can he possibly complete them and save the world without utterly ruining his carefully designed public persona!?

=======================================================
Note to all scanlators: If you recently started scanlating a new manga series (with about 5 or less chapters released) and would like your manga to be shouted out in the next New Manga Shout Out, then please PM me. Please include:
This is what tethysdust said this week:
Quote:
Boy's Room is a pretty quick collection to read, with short little love stories. Amaama to Inazuma seems like it will be one of those heartwarming unconventional family kind of stories. Tsukiyoda Sadame no Sekai no Sukuikata seems to follow a recent trend of mysterious cell phone games that force you to do things with real world consequences. This time around, though, it's more of a comedy.

My opinion:
Amaama to Inazuma seems great for those wanting a nice little slice of life manga. It kind of looks like it's going to set up the story to have the teacher get together with one of his students' mom...
Boy's Room - If you're in the mood for love, then you may want to check out this manga.
Tsukiyoda Sadame no Sekai no Sukuikata seems a bit ridiculous and interested me the most out of the three. I'm curious to see how stealing panties will save the world though... If you want a bit of ecchi and comedy, then you should take a look at this manga...


If you haven't done so already, check out the scanlations of the mangas from previous shout outs which have been recently scanlated: ecchi action manga Killing Bites (MH link), slice of life comedy Baby, Kokoro no Mama ni! (MH link).