Like us on Facebook, follow us on Twitter! Check out our new tumblr page. :)
Manga News: Toriko has come to an end; but be sure to swing by and share your favourite moments from the series!
Manhwa & Manhua News: Check out the new Manhwa and Manhua shout-out (March 2016).
Event News: One Piece Awardshas concluded. Check the results Here!
MangaHelpers > News > Shout-Outs > New Manga Shout Out: 8/10/09 - 8/16/09
Homepage
Details
Archives

Welcome to the next New Manga Shout Out. This week is another super slow week with barely any series debuting. However, if you like any of the series, remember to favorite them. Don't forget to also thank the various translators, raw uploaders/scanners and scanlators who feed your manga addiction. ^_^ Translators and Scanlators, please check out these series and see if you can spread some more manga love~

We're still looking for people who know Japanese and want to help write summaries for our manga database and for the shout out. Please PM me or bax if you want to help out. Now onto the series~ 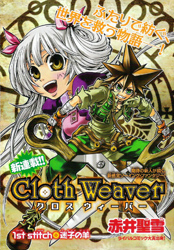 "Long, long ago, God descended down to the world engulfed in darkness. With the threads made from a sheep's wool, He created a wondrous piece of cloth, which gave rise to another world. That world is known as 'Divine Cloth'." This legend was passed down from generation to generation. Beneath the Earth and Divine Cloth is a world engulfed in darkness. There lives the creatures that were sealed by God known as Bugs. Frequently, Bugs plunged out of that world, creating holes on the Divine Cloth. To fix these holes and reseal the Bugs beneath the ground, two people, a young man and a woman, Ryle and Marino set out on their journey. 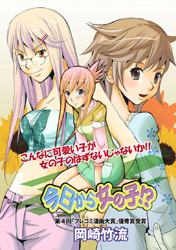 Kanata's lovely cousin, Yozu, is coming to live with him and his elder sister, Haruka, for high school. Unfortunately for him, Yozu has an intense fear of boys after coming to visit a few years ago and being tortured by a certain boy with frogs and snakes. What is he going to have to do?

Thanks go to Unproductive for the summary. 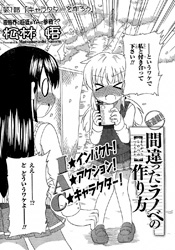 How to create a light novel #1: Character. This is how Kirino begins her project of writing a light novel. She finds Suzuha standing outside and finds her attractive and asks her if she could be her model for her light novel. Kirino claims that she wishes to receive the rookie award, and top the popularity of the Haruhi light novel series. Suzuha declines, but Kirino refuses to give up and constantly stalks her to obtain as much information as possible about Suzuha. A hilarious comedy of unexpected events and sexual jokes begins here!

Thanks go to Mamo for the summary. 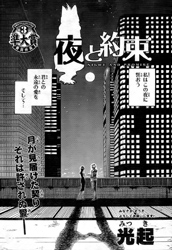 Yoshino Shinya is a high school boy who is bullied all the time at school, which leads him to have no friends. However, no one knows that he is actually half-youkai, and due to that, he has the desire to eat human flesh. But because of the promise he made with his youkai father never to prey on humans, Shinya tries to resist his youkai blood that is thirsty for human's blood, and live as a normal high school student. Will he be able to keep the promise he made with his father and keep his secret hidden?

=======================================================
Note to all scanlators: If you recently started scanlating a new manga series (with about 5 or less chapters released) that's hosted on MangaHelpers, and would like your manga to be shouted out in the next New Manga Shout Out, then please PM me. Please include:
Hmm... well, another slow week. I guess if I had to pick a series to scanlate, I'd go for Yoru to Yakusoku. Also, Kachou Reijou officially starts so if you only checked out the one-shots a while back (back then they were labeled as chapter 1/2), then now is the perfect time to check out the first chapter.

[Permalink]
The second title's worth a look

[Permalink]
[Yoru to Yakusoku] seems like the only one here of interest to me. :3
I might translate that if no-one else will.

im looking at some of the tittles... may trans something.

Hope Yoru to Yakusoku gets it serialization soon...the only one out of the three already announced in Rival that I know that'll get serialized in the magazine right away is Knight Light anyway (cool story...will come around this winter, as it said...and the one that I'm most interested in out of the three...XD )

PS. THANKS FOR THE SHOUTOUT~ X3

[Permalink]
CW looks crazy, whether its crazy good or crazy bad has yet to be determined

Thanks as usual c_k xD

[Permalink]
Only the second one looks interesting to me the others look really boring.....exceept for maybe the first one

[Permalink]
@shadowfoxes_21: Oops, thanks for the heads-up. I guess doing this late at night is not a good idea. >.> And I hope to see your TL if you find something interesting. ^_^

@Ju-da-su: Oops again. Yeah... my mistake again. >.> Oh, but it's definitely interesting to see Yoru serialized, although it reminds me of Nurarihyon no Mago...

And hmmm... people are interested in the second series, and yet no one is willing to make a short summary for it? ;_;

[Permalink]
Ha, Kyou Kara Onnanoko!? (今日から女の子!?) is so short, any summary will be a spoiler.

Kanata's lovely cousin, Yozu, is coming to live with him and his elder sister, Haruka, for high school. Unfortunately for him, Yozu has an intense fear of boys after coming to visit a few years ago and being tortured by a certain boy with frogs and snakes. What is he going to have to do?

[Permalink]
I don't know why, but I'm looking forward to seeing Cloth Weaver done. It looks interesting in it's own way.

[Permalink]
@Unproductive: Thanks for the summary. ^_^

[Permalink]
2~4 look interest for me...
And there is no scalantions yet...
Well, thanks for the Shout Out

[Permalink]
I always have had this character that uses giantic scissors as a weapon (since early chilhood), so thats why I am some what interested in Cloth Weaver. At least assuming by that pic, the protagonists uses scissors.

Other way, the last one could be interesting.

[Permalink]
No. 2 was mildly interesting....I might translate it sometime over the next few days if I can squeeze out a few hours here and there.

[Permalink]
Hoho, I'll see if I can get started on Machigatta Light Novel no Tsukurikata

[Permalink]
I can't wait to see how CW goes.

[Permalink]
Wow, Machigatta Light Novel no Tsukurikata. Attacking someone with bread, and jumping out of a window in to an awkward situation... all within the first 7 pages. I'm hooked. :)

[Permalink]
I like Yoru to Yakusoku. I wonder how he keep his secret hidden in the high school.