Like us on Facebook, follow us on Twitter! Check out our new tumblr page. :)
Manga News: Toriko has come to an end; but be sure to swing by and share your favourite moments from the series!
Manhwa & Manhua News: Check out the new Manhwa and Manhua shout-out (March 2016).
Event News: One Piece Awardshas concluded. Check the results Here!
MangaHelpers > News > Shout-Outs > New Manga Shout Out: 12/17/12 - 12/23/12
Homepage
Details
Archives

Welcome to the next New Manga Shout Out. This weekly article introduces you to manga that are new and/or have not been scanlated yet. This week features a ridiculously stupid girl, humans reborn as monsters and a doctor with a double life. Remember, if you like any of the series, favorite them. Don't forget to also thank the various people who feed your manga addiction. ^_^ Translators and Scanlators, please check out these series and see if you can spread some more manga love~ 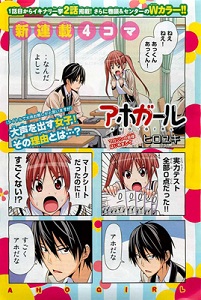 This 4-koma style manga features Yoshiko, a genuinely stupid girl (she can even manage to get all 0's on multiple choice tests.). She hangs out at school with her childhood friend, who she claims to like, and he has to put up with all her ridiculous behavior! 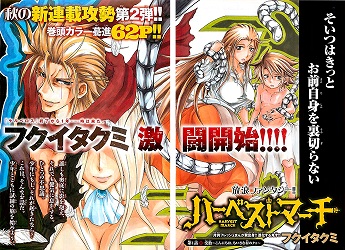 In a small village by a forbidden forest, the siblings Noie and Kubante live together peacefully. Noie is more of a mother than an older sister to Kubante, and she is loved by the village for her industriousness and bright personality. She loves Kubante very dearly, but he's little and weak. He's unable to do as much work as many of the other boys, and he is mocked for it by the villagers.

One day, an older boy named Shido invites him and some other children to come into the forest, with the promise that they will be changed. The change is much more brutal than any of the children could have foreseen. The powerful monster that Kubante becomes in the depths of that forest is no longer human, though he remembers his love for his sister. The other children lose their humanity completely, and use their deadly new power in an attempt to murder all humans for the monstrous 'mother' that gave them rebirth. Kubante's loyalty will always be to his beloved sister, so he must stand against the others who want to see her, and all humans, dead. 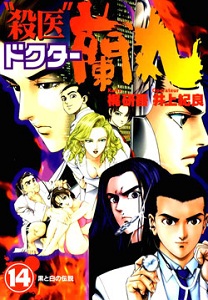 Dr. Ranmaru might seem a little too lighthearted and lecherous for a doctor, but he becomes dead serious when it comes to the health of his patients. No one knows, though, that he has another goal after hours. He heals his patients during the day, and he helps to repair society by night-- by 'surgically' removing bad people. His usual targets are those that have harmed his daytime patients. After Dr. Ranmaru saves the life of her grandfather, the school girl Maria begins to work part-time at his office. As Maria gets to know Dr. Ranmaru, will she learn his dangerous secret? 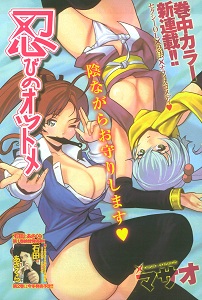 Matsudaira Yuichi thinks he's an ordinary salaryman, and one who isn't very good at his job. He doesn't know he has two hot, female, ninja bodyguards! Hattori Asuka and Kirino Saiko follow him everywhere to insure his safety, and they even interact with him directly in their guise as his coworkers. Another girl in his department, Kyoko, is actually a ninja of another clan that is after Yuichi's life. Will Yuichi be able to continue his ordinary life, completely oblivious to all the ninja action in the shadows?

=======================================================
Note to all scanlators: If you recently started scanlating a new manga series (with about 5 or less chapters released) and would like your manga to be shouted out in the next New Manga Shout Out, then please PM me. Please include:
This is what tethysdust said this week:
Quote:
Harvest March most caught my attention this week. It seems set up to have lots of super-power battles, but I especially liked the interaction between the characters. However, it is extremely violent for a shounen.

My opinion:
None of the manga really seems to interest me... ^^;;

5 members and 0 guests have thanked c_k for this news

[Permalink]
Harvest March looks really promising. Very nice development until now. The only thing that bothers me, is that the MC boy is so young T_T I prefer the MC is a bit more mature. Hopefully there will be some kind of time-skip, then it would be perfect.