Like us on Facebook, follow us on Twitter! Check out our new tumblr page. :)
Manga News: Toriko has come to an end; but be sure to swing by and share your favourite moments from the series!
Manhwa & Manhua News: Check out the new Manhwa and Manhua shout-out (March 2016).
Event News: One Piece Awardshas concluded. Check the results Here!
MangaHelpers > Manga > Browse > P2! - Let's Play Pingpong!
Home
Chapters
Translations
Thread
RSS 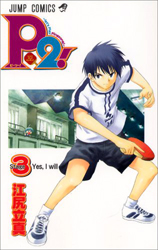 The series is about Hiromu Aikawa, a small yet slightly unathletic middle school boy. Finding himself with a competitive streak that forces him to embarrass himself, he attempts and fails to join twelve separate sports clubs with little success. However as he is about to give up, he wanders into the practice area for the school ping-pong team, which inspires him to at least make another attempt into a sport. Although he nearly fails, his courage and determination in front of the club heads allow him to join the club and start playing ping-pong. [Wiki]