Like us on Facebook, follow us on Twitter! Check out our new tumblr page. :)
Manga News: Toriko has come to an end; but be sure to swing by and share your favourite moments from the series!
Manhwa & Manhua News: Check out the new Manhwa and Manhua shout-out (March 2016).
Event News: One Piece Awardshas concluded. Check the results Here!
MangaHelpers > Manga > Browse > Prince of Tennis
Home
Chapters
Translations
Thread
RSS 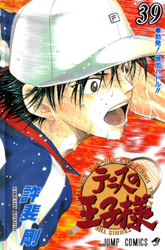 Ryoma Echizen just joined the Seishun Academy's tennis team, which is known for being one of the most competitive teams in Japan. Its members are incredibly talented, gifted, and athletic. With rigorous and extremely intense practices, the upperclassmen of the team expect the very best from themselves and they expect even more from the new members of the team. While most of the freshmen are on pins and needles hoping they won't get cut from the team, Ryoma Echizen is confident, cool, and collected. Some might even say he's cocky, but at least he's got the skills to back up his attitude. With his virtually unreturnable "twist serve," Ryoma is sure to make the starting team.

Join Ryoma and the other first years, as they train hard, make friends, and try to find a place for themselves on the team. And meet Ryoma's cute but chronically shy classmate Sakuno Ryuzaki. She's got a big crush on Ryoma, but will he ever notice her? Ryoma Echizen is the Prince of Tennis. He may be ready for the Seishun Academy tennis team, but are THEY ready for HIM?

Continued in New Prince of Tennis.

Throughout the years of lurking on the internet, all I ever heard about PoT is that it's crap. Even its fans wouldn't sound too enthusiastic about it. So it's only natural that I've avoided this manga like a plague.

That was until a few weeks ago, when I got a request to make a sig with a PoT character, and was reminded that not everyone hates PoT. And so I thought "Hey, maybe I should check it out after all. If it's really THAT bad, then I'll just drop it after the first chapter". And surprise surprise, Prince of Tennis is one the most engaging and exciting manga I have ever read.

Ryouma, the main lead, is cocky, but just too cool to not want to root for. In the very first chapter, where he gets hit with a racket, but doesn't get discouraged at all, and actually makes his opponent almost crap his pants, was what sold me on his character and this manga.

I've seen people complaining about Ryouma being too perfect, but I personally never saw anything wrong with a character being perfect. Ryouma being too good to be true was never a real minus for PoT, or at least in my opinion. Though I guess not being able to tolerate a character like that would really impair your enjoyment, especially in the moments where Ryouma comes to save the day.

Ryouma isn't the only person on the cast though. The cast is huge and filled with varied, memorable, and (usually) likeable characters. Even those characters that I disliked in the beginning, I came to like later on as more of them was shown. Especially Kaidou and Inui, those two really grew on me.

My only complaint here would be Sakuno. From her prominence in the first few chapters, she seemed like a character that is a part of the main cast, but she quickly faded away, and not even into the background, she faded away completely, and would just get a random cameo from time to time. I didn't particularly mind that, but I guess she could have been better incorporated into the manga, with prominence that was a bit more consistent.

For the first 190 or so chapters the tennis in PoT actually kinda looks like real tennis. But then, suddenly and unexpectedly, Ryouma wins a match against an overwhelming opponent by playing with his subconscious, and superpowered tennis gets introduced into the manga. It never stops entertaining you though. Even those characters that you would never expect it from, manage to have matches that keep you on the edge of your seat. You know Seigaku's going to win, but you still are too excited to stop reading.

I can see how the suddenly introduced superpowers can bother some people though. Especially since this manga basically has no story, just tennis, tennis, and some more tennis for a good measure, so not enjoying the matches means not enjoying the manga. (There are a few non-tennis chapters of comic relief here and there, but even those are all based on competing with each other, fitting the manga's never-ending string of matches.)

Though, in my opinion it's not really that hard to accept the superpowers as a part of the manga. As long as you keep in mind that stuff will get completely crazy by the end, you should be enjoying every match just as much as I did.

And, personally, I found the explanation for the "Ten'inuhou no Kiwami" to be very heart-warming. People tend to make fun of the moment saying that Ryouma turned into a Super Sayian, and while I do find the comparison to be very amusing, too many people seem to completely miss the message that the last few chapters send and make the finale completely satisfying.

The only complaint I have here is that Seigaku played against Hyoutei like three times throughout the manga. There are limits to how much you can squeeze out of the same group of characters having matches against each other. The mystery surrounding the opponents of Seigaku was one of the main attractions of the matches for me, you'd never know what trump card a character is hiding up his sleeve. That, though, is just nit-picking, the finale is more than exciting enough, regardless of which time Hyoutei was being played against.

There isn't really much to say about the art, everything is drawn clearly and you are never left confused about what the hell is going on. In the beginning those enormous eyes were a bit jarring, but thankfully they shrank pretty fast. And generally, the art gets noticeably better as the manga goes on, resulting in some really memorable double-spreads.

One qualm that I often have with manga, even those that are between my all-time favourites, is that while those manga are great, they are not consistently great. There are sometimes these moments that make you go "This manga would have been so much better if this chapter/page never existed". Not so with PoT though. I enjoyed every single chapter, every single moment of this manga, up to a 100%.

All in all, Prince of Tennis was an enjoyable and a very satisfying read, I highly recommend it to anyone who enjoys shounen sports manga. Permalink " "