Like us on Facebook, follow us on Twitter! Check out our new tumblr page. :)
Manga News: Toriko has come to an end; but be sure to swing by and share your favourite moments from the series!
Manhwa & Manhua News: Check out the new Manhwa and Manhua shout-out (March 2016).
Event News: One Piece Awardshas concluded. Check the results Here!
MangaHelpers > News > Shout-Outs > New Manga Shout Out: 10/26/15 - 11/1/15
Homepage
Details
Archives

Welcome to the next New Manga Shout Out. This weekly article introduces you to manga that are new and/or have not been scanlated yet. This week features a girl who has trouble getting to school on time, a boy with a loving sister and a landlord bent on getting rent. Remember, if you like any of the series, favorite them. Don't forget to also thank the various people who feed your manga addiction. ^_^ Translators and Scanlators, please check out these series and see if you can spread some more manga love~ 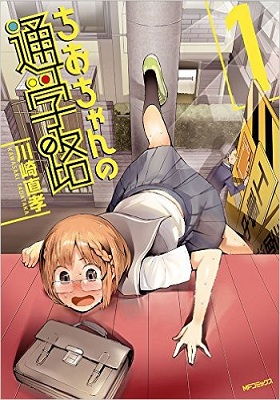 Chio-chan is a gamer and a high school girl who gets into some interesting predicaments on her way to school. For instance, she was once running late for class due to staying up all night playing a game like Assassin's Creed, and her usual route was blocked. Prompted by the previous night's gaming, she decided to take to the rooftops, a strategy that does not work quite as well in real life! She also faces more mundane difficulties, like awkwardness in interacting with a friendly acquaintance met by chance on the way to school. Join Chio on her funny and unusual daily journeys to get from home to school on time! 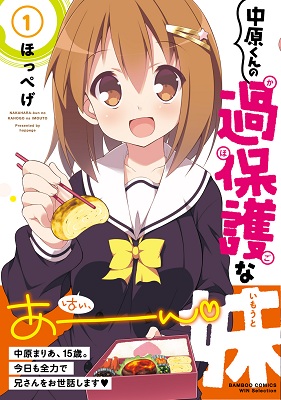 Nakahara Yusuke is a high school boy who has a very loving younger sister, Maria. She loves spending each day taking care of him, doing things such as cooking and cleaning around the house. However, she typically goes a bit too far into treating him like a child--she has a habit of coming to his classroom at lunch to hand-feed him his bento, or brushing his teeth for him at home. She even snoops out his hidden porn magazines. Other people think they're a bit weird, and that Maria acts like his lover or his mom. This 4-koma features their unusual daily life! 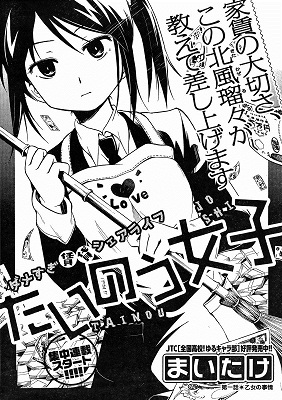 Inukai Kirara is two months behind on her rent, though the elderly man who is the apartment landlord has just been kindly letting things slide. One day, the old landlord's granddaughter, Kitakaze Ruru, shows up in Kirara's room to tell her that he is hospitalized, and that she's going to be taking care of all the back rent. Apparently, the old landlord's goal was to create a love comedy harem, and so he had let many of the inhabitants fall far behind in rent. Ruru is determined that she is going to get these messy and unruly tenants in line!

=======================================================
Note to all scanlators: If you recently started scanlating a new manga series (with about 5 or less chapters released) and would like your manga to be shouted out in the next New Manga Shout Out, then please PM me. Please include:
This is what tethysdust said this week:
Quote:
This week seems more lighthearted than usual, at least in the manga I've read. Chio-chan no Tsuugakuro was surprisingly funny, and I'm curious to see how much more weird stuff could happen on the way to school. Tainou Joshi focuses on an older cast of irresponsible women, and I believe it is finished at 4 chapters. Nakahara-kun no Kahogo na Imouto is a 4koma about an overprotective little sister--not really my style of comedy but it was pretty cute and innocent as far as I read.

My opinion:
Chio-chan no Tsuugakuro - If you're in the mood for a slice of life comedy and want to see the different ways someone can be late for school (so far with 3 volumes with!) then you should check this one out. This one sounds the best this week. :)
Nakahara-kun no Kahogo na Imouto - If you like manga depicting overbearing sisters that are a bit too invested in their brothers, then you may like this one instead.
Tainou Joshi - However, if you want a silly comedy filled with lots of girls (and a short series with only 4 chapters), then you may like this series.

If you haven't done so already, check out the scanlations of the manga from previous shout outs which have been recently scanlated: dramatic fantasy Saraba, Yasashii Yuuzuru (MH link), sci-fi action No Guns Life (MH link).

7 members and 3 guests have thanked c_k for this news