Like us on Facebook, follow us on Twitter! Check out our new tumblr page. :)
Manga News: Toriko has come to an end; but be sure to swing by and share your favourite moments from the series!
Manhwa & Manhua News: Check out the new Manhwa and Manhua shout-out (March 2016).
Event News: One Piece Awardshas concluded. Check the results Here!
MangaHelpers > News > Shout-Outs > New Manga Shout Out: 2/22/16 - 2/28/16
Homepage
Details
Archives

Welcome to the next New Manga Shout Out. This weekly article introduces you to manga that are new and/or have not been scanlated yet. This week features a girl hiding her love for convenience food, a boy reborn with summoning powers and a boy with spirit abilities. Remember, if you like any of the series, favorite them. Don't forget to also thank the various people who feed your manga addiction. ^_^ Translators and Scanlators, please check out these series and see if you can spread some more manga love~ 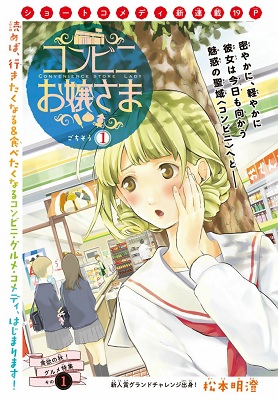 Midori is a young lady from a good family, and she should never be caught inside a convenience store. However, when she's really hungry, she craves convenience store food. She sneaks into the store with her face covered, to make sure she isn't spotted by classmates, and then brings the food home to remix in a meal of her own creation. She loves this convenience-store-gourmet style, but is afraid that she will one day be found out! 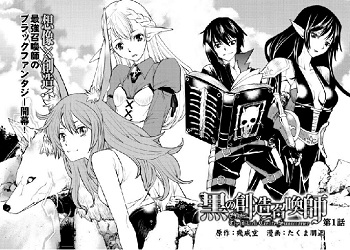 Due to a god's mistake, high-schooler Tsuguna died before his time. In exchange, the god agreed to do him a favor in his next life. Tsuguna is reborn to a noble household in a world with magic. He has an unusual form of magic that he requested from the god, the ability to create summoned creatures. However, his dark Japanese hair and eyes mark him as a cursed child in this new world, and his powers are slow to appear. He's kept in a dark basement where he reads his family's books, until one day he finally uncovers the key to his powers. Finally, he can set off into the world with his summoned companion to level up his skills! 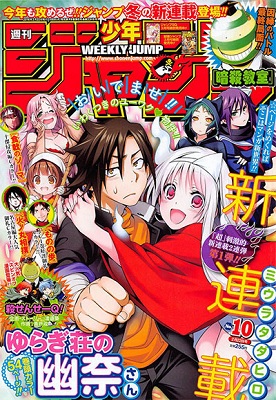 Fuyuzora Kogarashi has spirit abilities, and has been possessed by ghosts since he was a kid. This has caused a lot of trouble in his life, but now he has learned to fight back against the evil spirits! Unfortunately, he's now also very poor, homeless, and hoping for a happier, more normal, high school life. In his search for housing, he's introduced to a very cheap boarding house called Yuragi-sou, which was formerly a popular hot springs inn. It's so cheap because the house is haunted by the spirit of a high school student whose corpse was found there.

Kogarashi doesn't think this is going to be a problem for him, and the rest of the house's tenants appear to be sexy women. While relaxing in the hot springs, though, he finds there is an issue with his ghost-banishing plan; Yuragi-sou's ghost is a 16-year-old girl named Yuna, who lives in his room. Kogarashi has no desire to hurt a ghost girl, and instead he ends up agreeing to help her to figure out her unfinished business. That way, she can move onto the afterlife before turning evil and falling into hell. Once it is clear that he is fine with Yuna, the other tenants reveal their own supernatural secrets--his life in Yuragi-sou is going to be far from ordinary!

=======================================================
Note to all scanlators: If you recently started scanlating a new manga series (with about 5 or less chapters released) and would like your manga to be shouted out in the next New Manga Shout Out, then please PM me. Please include:
This is what tethysdust said this week:
Quote:
Yuragi-sou no Yuuna-san seems like a supernatural take on a standard harem, but it was pretty fun. I'm curious to see what they can uncover about why Yuna hasn't moved on. Konbini Ojou-sama would probably be interesting for people who want to use Japanese convenience store food in cooking. Kuro no Souzou Shoukanshi is yet another manga about a shinigami making a mistake that ends someone's life and offering them special consideration in their next life in a magical world (this seems like a very specific thing to have become a trend). In this one though, it becomes clear that this setting is actually just a variation on the 'pulled into a video game' genre. I expect that this one will appeal to fans of that subgenre.

My opinion:
Konbini Ojou-sama - If you're interested in seeing how someone can combine different foods at a konbini/convenience store and create a new concoction or are a food lover, then you may like this manga.
Kuro no Souzou Shoukanshi - Based on a novel (like many new manga), if you like adventure manga with a fantasy element, then you may want to check it out.
Yuragi-sou no Yuuna-san - However, if you're more into ecchi harems with a supernatural element, then you may want to check this manga instead.


If you haven't done so already, check out the scanlations of the manga from previous shout outs which have been recently scanlated: school life sports manga Houkago Sword Club (MH link).

3 members and 5 guests have thanked c_k for this news