Like us on Facebook, follow us on Twitter! Check out our new tumblr page. :)
Manga News: Toriko has come to an end; but be sure to swing by and share your favourite moments from the series!
Manhwa & Manhua News: Check out the new Manhwa and Manhua shout-out (March 2016).
Event News: One Piece Awardshas concluded. Check the results Here!
MangaHelpers > Manga > Browse > Kabu No Isaki
Home
Chapters
Translations
RSS 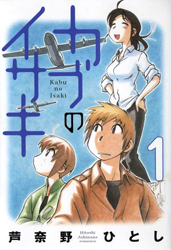 Living in the boonies, one must give great consideration as to how they will get around when they turn 16. Isaki has just tuned 16 and his choice of transportation is his brother's Piper Cub. It might be old, but it flies well. One day he decides to fly over the 2,000m high Ogusa mountain range to see the city his older sister is always talking about. But for some reason his plane feels too heavy and is using fuel faster than planned. Will he make to the airport or crash in the bushes. And just what was making the plane feel so heavy?

Originally a oneshot, but became a regular feature to Afternoon due to its popularity...

The summary is wrong in the cub belongs to Isaki's neighbourhood, not to Isaki's brother. Permalink " "