Like us on Facebook, follow us on Twitter! Check out our new tumblr page. :)
Manga News: Toriko has come to an end; but be sure to swing by and share your favourite moments from the series!
Manhwa & Manhua News: Check out the new Manhwa and Manhua shout-out (March 2016).
Event News: One Piece Awardshas concluded. Check the results Here!
MangaHelpers > Manga > Browse > Ressentiment
Home
Chapters
Translations
RSS 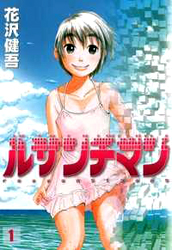 In 2015, AI development has reached the point where dating sims and the like are almost real. Takuro is a fat, balding loser who is feeling panicked by the onset of his 30s and lack of a woman. At his friend's insistence, Takuro decides to give up on real women forever and take the VR plunge. What follows is not as planned, however, and leads Takuro questioning if VR is really the best thing. [ANN]