Like us on Facebook, follow us on Twitter! Check out our new tumblr page. :)
Manga News: Toriko has come to an end; but be sure to swing by and share your favourite moments from the series!
Manhwa & Manhua News: Check out the new Manhwa and Manhua shout-out (March 2016).
Event News: One Piece Awardshas concluded. Check the results Here!
MangaHelpers > News > Shout-Outs > New Manga Shout Out: 11/16/09 - 11/22/09
Homepage
Details
Archives

Welcome to the next New Manga Shout Out. Not much new manga this week, but check them out anyway. Remember, if you like any of the series, favorite them. Don't forget to also thank the various translators, raw uploaders/scanners and scanlators who feed your manga addiction. ^_^ Translators and Scanlators, please check out these series and see if you can spread some more manga love~ 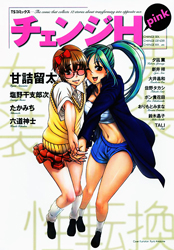 One volume from Change H, an anthology series of short non-hentai (though possibly ecchi) stories focusing on transgender, crossdressing, and sexual transformation -- published by the editors of Shounen Gahosha's Monthly Young King under the TS Comics imprint.

Boy Meets Girl, Girl Meets Boy is the lead-off story, a one-shot by Ryuta Amazume (the author of Nana to Kaoru) that describes the issues two students face as they struggle with "Acquired Gender-Change Disorder" -- Yu, a boy, begins to grow breasts, and Junko, a girl, grows a penis. How do they deal with the changes sweeping their bodies? 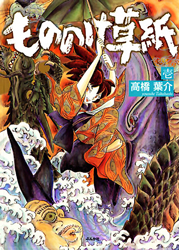 This is the story of a girl who works as an entertainer at a sake house, but who has a unique ability. She has a tattoo of an eye on her hand and she has the ability of "second sight". Though this often comes in handy, it also complicates her life. She is constantly getting involved in situations with various supernatural creatures, such as animal spirits, kappas, and more. 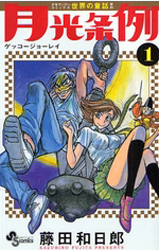 Once every ten years, blue moonlight makes the world of fairy tales and myths become a little strange. The characters in these stories during this period can come to life and find their way into the human world! High schooler Gekko Iwasaki is selected as executor of "Moonlight Ordinance", and must fight to return stories that become twisted by the moonlight to their original form. 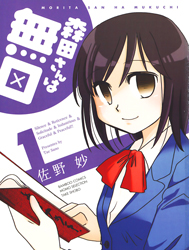 The silent protagonist Morita Mayu is a high school girl who over-analyzes things and so often finds it difficult to express herself through speech. This is a 4-koma school comedy about her day-to-day affairs and the misunderstandings she has with the people around her. 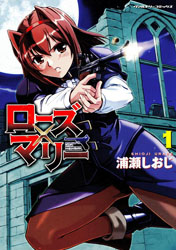 The modern age has wonderful technology, but it has not managed to eradicate the monsters that are lurking in the darkness. As long as these monsters exist and prey on humanity, there will also be the hunters. Two of these hunters are Rose and Marie, two little sisters with big guns. As they fight, they continue to look for clues as to what happened years ago on the day that their town was attacked and they lost their beloved brother. 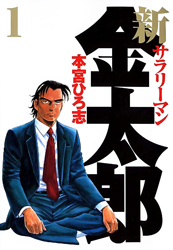 The sequel to Salaryman Kintarou. Yajima Kintarou was a leader of a biker gang until he fell in love with Akemi. She died in childbirth, and her dying wish was for Kintarou to become a salaryman and raise their son, Ryuuta, in a stable environment. To honor her last wish, Kintarou quit the gang life and became a salaryman.

This sequel takes place years later, when Kintarou returns home to Japan from working in an Arab country. Now Ryuuta is a college student, and Kintarou's family has grown to also include his wife and his daughter, Mika. Now that his children are older, Kintarou's personal and professional life are different than they used to be. 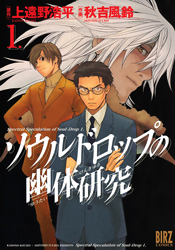 Based on a book by the author of the "Boogiepop" novel series, which spawned the anime series "Boogiepop Phantom." First of two manga series in the "Soul Drop" metaseries.

The shapeshifting phantom thief known as "Paper-Cut" is an entity that steals seemingly random everyday objects of importance only to their owners -- objects so important that their owners literally can't live on without them. Cyborg detective Senjou Masato and his minder Isa Shunichi are employees of Socom Insurance, ordered to investigate suspicions of certain individuals committing crimes in Paper-Cut's name to fraudulently claim insurance funds.

One of Paper-Cut's theft announcements have recently been found at the auditorium where a memorial concert for the late pop idol Minamoto Shizuku is to be held. Suspecting foul play, Isa and Senjou appear at the site, claiming to be an insurance assessment team sent by Socom. Will Paper-Cut really manifest?

=======================================================
Note to all scanlators: If you recently started scanlating a new manga series (with about 5 or less chapters released) that's hosted on MangaHelpers, and would like your manga to be shouted out in the next New Manga Shout Out, then please PM me. Please include:
Here's what Tethysdust says about this week:
Quote:
Mononoke Soushi is by the same guy who did Machiwarashi (and a lot of other supernatural fiction), so it has the same general art and storytelling style as that one. Rose X Marie was a "scantily clad girls with guns fighting monsters" manga, but it was a fun and exciting read in my opinion. I only read a bit of Spectral Speculation of Soul-Drop, but it seems really interesting despite the silliness of the name (I also liked Boogiepop).
I read the one-shot by Ryuta Amazume and it was a bit disappointing to me, but fans of his will be sure to read it. Rose x Marie sounds a bit interesting and I'm interested in seeing Soul Drop scanlated, although it reminds me a bit of the anime "Nijuu-Mensou no Musume."

If you haven't done so already, check out these scanlations for previous shout-out mangas that recently got scanlated: Mission! School, Tenkyuugi -Sephirahnatus-, Tokyo Bardo, Heroman, Shinsengumi Jingishou Asagi, Cafe Detective Club, the We Can Fly one-shot and Shinigami Alice.

If anyone can read Japanese and can help out for next week's shout out, I'd really appreciate it since Tethysdust is busy and can't help out. All it involves is reading some manga and making a summary for it, so if you have some time to read raw manga, please PM me. It's just for next week. ^^;;

[Permalink]
None of them get my atention this time

[Permalink]
None of these seem to appeal to me oh well

Er, I'm pretty new here and I don't really know how this works; if I wanted to work on the translation of say, Mononoke Soushi- is there someone I need to contact or something?