Like us on Facebook, follow us on Twitter! Check out our new tumblr page. :)
Manga News: Toriko has come to an end; but be sure to swing by and share your favourite moments from the series!
Manhwa & Manhua News: Check out the new Manhwa and Manhua shout-out (March 2016).
Event News: One Piece Awardshas concluded. Check the results Here!
MangaHelpers > Manga > Browse > Again!!
Home
Chapters
Translations
Thread
RSS 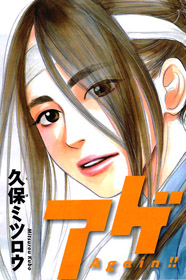 Imamura Kinichiro reluctantly wakes up one day to attend his high school graduation. He's made no friends in high school and joined no clubs. Due to his long blonde hair and surly attitude, he was feared by all his classmates. Reflecting on his awful high school years, he remembered a girl from the cheering squad who he saw during his freshman welcome ceremony, three years ago. Searching for the old cheering squad's clubroom, he accidentally startles a classmate, causing them both to fall down a flight of stairs...

Upon waking, he finds it is the morning of his first day of high school, three years prior. As he confusedly goes through his day, he's able to correct a lot of the mistakes he made the first time around, such as actually interacting with the cheering squad girl, Usami Yoshiko! But did he really travel in time, or is this all just a dream he's having while his body is lying unconscious somewhere? Could he really have the chance to go through his high school years again? [tethysdust]