Like us on Facebook, follow us on Twitter! Check out our new tumblr page. :)
Manga News: Toriko has come to an end; but be sure to swing by and share your favourite moments from the series!
Manhwa & Manhua News: Check out the new Manhwa and Manhua shout-out (March 2016).
Event News: One Piece Awardshas concluded. Check the results Here!
MangaHelpers > Manga > Browse > Ginen Shounen
Home
Chapters
Translations
Thread
RSS 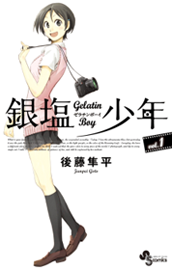 Matataki (boy) and Mirai (girl) have been best friends since they were young and even years later as high school classmates, their gender differences have not affected them and they get along like they were siblings. Matataki has always liked Mirai, but his shy personality has kept him from being honest to her. However, through his hobby, photography, he feels like he can express his emotions better to other people, including Mirai.

He soon realizes that he is able to see the future through the camera lens, but, to his dismay, he sees the future Mirai with another man. What is even more disturbing is that, through the camera, he sees himself dead. Matataki has to prevent his death and make Mirai fall in love with him, but how can he change the future? [vyc]