Like us on Facebook, follow us on Twitter! Check out our new tumblr page. :)
Manga News: Toriko has come to an end; but be sure to swing by and share your favourite moments from the series!
Manhwa & Manhua News: Check out the new Manhwa and Manhua shout-out (March 2016).
Event News: One Piece Awardshas concluded. Check the results Here!
MangaHelpers > Manga > Browse > Jojo's Bizarre Adventure: Stone Ocean
Home
Chapters
Translations
Thread
RSS 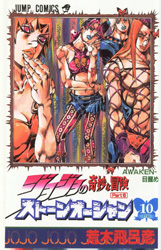 SERIES 6: "Stone Ocean"
Time: Early 21st Century -- Place: A Florida prison
Set in and around the maximum-security Green Dolphin Street prison in Florida, surrounded by palm trees, swamps, and man-eating alligators, this storyline stars Jolyne Kujo (Stand: Stone Free), the daughter of Jotaro Cujoh. After being falsely accused of a hit-and-run automobile accident, she is sentenced to 15 years in jail, a plot which may be orchestrated by some dark conspiracy, some unknown enemy. Series 6 is a weird prison story in which Jolyne discovers her own powers and other Stand Users while trying to escape the pen. Her dad Jotaro Kujo returns for a cameo in the first few volumes, and Dio, the ultra-villain of the JoJo series, also shows up in several flashbacks, with a fragment of his corpse playing a major plot point. This series appears to be an attempt for Araki to relaunch the series for new readers (the graphic novels are numbered starting with "Vol. 1" with "JoJo Vol. 63", and so forth, in small letters) by re-explaining the Stands and introducing a slinky, appealing female protagonist. And for the most part, it takes place within a literally confined environment -- Araki had previously done some short manga stories set in jail, so maybe that's where his current interests lie. Note also that Jolyne is the first American (specifically Japanese-American) JoJo protagonist. The sheer level of weirdness is also pretty mind-boggling, with all kinds of bizarre phenomena -- rains of frogs, time distortion, and some extremely odd, conceptual Stands. And the ending is probably one of the strangest things ever to happen in the series.

From the Jojo Faq