Like us on Facebook, follow us on Twitter! Check out our new tumblr page. :)
Manga News: Toriko has come to an end; but be sure to swing by and share your favourite moments from the series!
Manhwa & Manhua News: Check out the new Manhwa and Manhua shout-out (March 2016).
Event News: One Piece Awardshas concluded. Check the results Here!
MangaHelpers > Manga > Browse > Blaster Knuckle
Home
Chapters
Translations
RSS 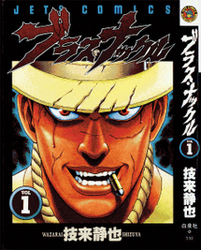 Take yourself back to the 1880s where the KKK is thriving and the African American community lives in fear. The African Americans don't fear the KKK simply because they beat, rape, and kill them. No. They fear the KKK because the KKK eats them. They are the aptly named man-eaters, a kind of mix between werewolves and vampires. They consume human flesh, can shapeshift into various forms, and are practically immortal. Only one man, an ex-heavyweight boxer named Victor Freeman, dares to stand up to them. Equipped with a small arsenal and a set of modified brass knuckles, can our hero defend his people and avenge his past?