Like us on Facebook, follow us on Twitter! Check out our new tumblr page. :)
Manga News: Toriko has come to an end; but be sure to swing by and share your favourite moments from the series!
Manhwa & Manhua News: Check out the new Manhwa and Manhua shout-out (March 2016).
Event News: One Piece Awardshas concluded. Check the results Here!
MangaHelpers > Manga > Browse > Dead Soul Revolver
Home
Chapters
Translations
RSS 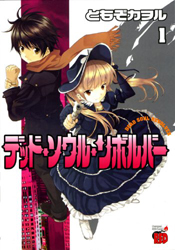 When a person becomes overwhelmed by negative emotions, they will turn into a murderous demon! Luckily there are people, like the cute, gun-carrying, girl Tsukishima Miyu, whose job is to hunt down and kill these dangerous creatures.

One day, high school student Kagami Kenichi runs into one of these demons while taking a shortcut down a back alley. Kenichi is certain he's going to die, until Miyu comes and runs the creature off! Now Kenichi finds himself becoming entangled in this demonic situation, and after the next demon fight he witnesses, he's officially in too deep.

When things are desperate, Miyu makes a "contract" with Kenichi. This contract allows Miyu to use Kenichi's soul energy to create a massive weapon with which to defeat the demon. One unfortunate side effect is that if he ever strays too far from Miyu, he will die. Will Kenichi be strong enough to handle his violent new life with Miyu?