Like us on Facebook, follow us on Twitter! Check out our new tumblr page. :)
Manga News: Toriko has come to an end; but be sure to swing by and share your favourite moments from the series!
Manhwa & Manhua News: Check out the new Manhwa and Manhua shout-out (March 2016).
Event News: One Piece Awardshas concluded. Check the results Here!
MangaHelpers > Manga > Browse > Nazo no Kanojo X
Home
Chapters
Translations
RSS 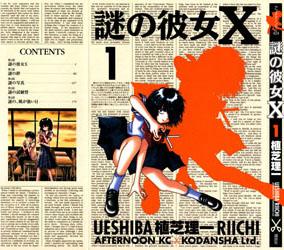 Was originally a one-shot in Afternoon in 2004 before it became a series in 2006.

One day, a strange transfer student appears before Tsubaki. Urabe Mikoto is an antisocial girl, whose hobby is just sleeping during class-breaks. One day, Tsubaki goes to wake her up and accidentally tastes her drool... And gets hooked on that!

After that, he starts going out with her and gets to know her better. Her second hobby, as it turns out, is carrying around scissors in her panties and cutting paper into flowers...