Like us on Facebook, follow us on Twitter! Check out our new tumblr page. :)
Manga News: Toriko has come to an end; but be sure to swing by and share your favourite moments from the series!
Manhwa & Manhua News: Check out the new Manhwa and Manhua shout-out (March 2016).
Event News: One Piece Awardshas concluded. Check the results Here!
MangaHelpers > Manga > Browse > Alive
Home
Chapters
Translations
Thread
RSS 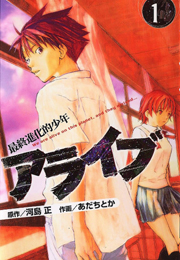 A young student named Taisuke stands up for his friend, Hirose, who often seems to be picked on. Besides that, he lives a rather normal life with his childhood friend, Megumi, and his older sister who works as the nurse of the school. Both of his parents were killed in a car accident. But one day, a strange virus starts making people commit suicide during that week. Taisuke witnesses one of these suicides and is gifted suddenly with a strange ability. He soon finds out that Hirose has left school, and Megumi has been kidnapped. In order to find his friends, Taisuke sets out on a journey. However, along the way he encounters people like him, who have abilities, and as he continues his journey the mystery of these people and the virus slowly starts to unfold.