Like us on Facebook, follow us on Twitter! Check out our new tumblr page. :)
Manga News: Toriko has come to an end; but be sure to swing by and share your favourite moments from the series!
Manhwa & Manhua News: Check out the new Manhwa and Manhua shout-out (March 2016).
Event News: One Piece Awardshas concluded. Check the results Here!
MangaHelpers > Manga > Browse > Saint Seiya: The Lost Canvas
Home
Chapters
Translations
Thread
RSS 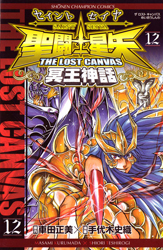 This manga tells the story of the previous Holy War, taking place in the 18th century, 250 years before the original series, in the Saint Seiya universe. The story centers on the relation between Tenma, the Pegasus Saint and his beloved friend, Alone, who would eventually become his greatest enemy, Hades.

The story takes place in the same time period as Saint Seiya Next Dimension.

Is there any English version of saint seiya : the lost canvas Ch 1? Permalink " "
Review by Darth_Eagle

giok_yong, you can read the earlier chapters of Lost Canvas English Scanlation at places like MangaFox or OneManga :

The art is diffrent then the other one but its still good. It should be finished. Permalink " "