Like us on Facebook, follow us on Twitter! Check out our new tumblr page. :)
Manga News: Toriko has come to an end; but be sure to swing by and share your favourite moments from the series!
Manhwa & Manhua News: Check out the new Manhwa and Manhua shout-out (March 2016).
Event News: One Piece Awardshas concluded. Check the results Here!
MangaHelpers > News > Staff Blogs > Kaotic Korner - What's Going to Make or Break Full Drive?
Homepage
Details
Archives 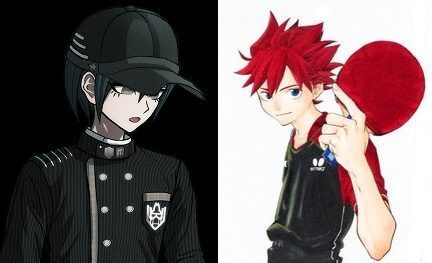 Greetings everyone, this is Kaoz with a short post about what's going to make or break Full Drive, at least in my opinion. If you haven't checked it out yet, Full Drive is a series about table tennis and one of the latest additions to the WSJ line-up. The protagonist is Dan Tamashiro, a 13-year old who grew up in Germany and only recently returned to Japan to make a name for himself. As of chapter 2, the trait that sets Dan apart from other protagonists of this genre is his lack of self-confidence. Regardless of whether they're well-established from the beginning like Ryoma from Prince of Tennis and Kuroko from Kuroko's Basketball, or start from the bottom like Hinata from Haikyuu!! and Sawamura from Ace of Diamond, for none of them doubt was a central theme of their character. In other words, unless you really like table tennis or are a fan of the art or similar, Dan's journey of overcoming his confidence issue is what you would want to read Full Drive for. In this vein I want to first look at a character from a different genre and medium and then give a brief outlook on how Full Drive might succeed and how it might fail.

The character I want to discuss is Shuichi Saihara from the game Danganronpa V3. The Danganronpa series centers around the concept of a killing game in which 16 individuals are confined and have to kill one of the other participants without being found out in the subsequent trial to escape. Furthermore, each of the participants possesses a special ability, their so-called "Ultimate" talent. Shuichi is the Ultimate Detective, so it stands to reason that he is very skilled at finding the various murderers at the trials. However, because of his backstory, he also has very little confidence in his own deductions and at times even rejects them out of fear of the truth. I hope you can at least partially see the comparison to Dan here. Even though we don't yet know how good Dan is exactly, it's clear that he's quite strong when it comes to table tennis. Now, as the game progresses, Shuichi gradually becomes more sure of himself thanks to the encouragement of his friends and his peers depending on him to stay alive. This works fairly well because there's a clear dissonance between reality and Shuichi's internal world at the beginning of the game and the two align more and more as the story progresses.

I think when it comes to Full Drive, the question is: how can Dan pull off something similar? To be frank, the way the story is set up right now, I don't have a clear answer. The major difference between Shuichi and Dan here is that the former's skills and confidence issues were in the same area which contributed to a dissonance that could be resolved while focusing on progressing the story, but the latter is already confident in his area of expertise, he just lacks it everywhere else. In order to achieve a similar effect, I think we'll either need someone to corner Dan psychologically very early on or there needs to be a greater focus on his life overall than what's common in the mainstream sports series, so that his success in table tennis can have a positive impact on other areas. If Full Drive does neither of those things, I would expect it to fall by the wayside very quickly.


How do you guys feel about this? Do you think Full Drive will be able to pull off an engaging tale of a young boy overcoming his confidence issues through sports? Or maybe you think this isn't one of the manga's central themes at all? Whichever it is, share your opinion in the comments or our discussion thread.

Thanks for reading and I hope to see you all next time.
-Kaoz

3 members and 1 guests have thanked Kaoz for this news