Like us on Facebook, follow us on Twitter! Check out our new tumblr page. :)
Manga News: Toriko has come to an end; but be sure to swing by and share your favourite moments from the series!
Manhwa & Manhua News: Check out the new Manhwa and Manhua shout-out (March 2016).
Event News: One Piece Awardshas concluded. Check the results Here!
MangaHelpers > News > Site News > Chapter Review: Edens Zero (19)
Homepage
Details
Archives 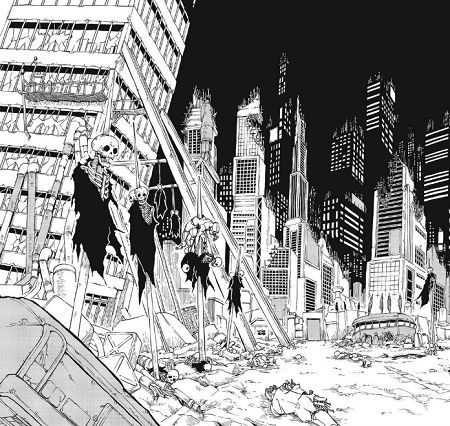 Why do you suppose the tourism industry died? It looks so nice!


This week begins with Captain Shiki taking off in Edens Zero with Pino and Witch after the dastardly fiends that kidnapped Rebecca, along with a group of other B-Tubers, and are currently in route to Planet Guilst.

Onboard the kidnapper's ship Rebecca demands to know whats going on and who these jerks are resulting in her introduction to the two non-ninja kidnappers Ganoff (Ugly Fishman) and Mosco (Robofatso). Learning that they're members of an outlaw mercenary outfit called Rogue Out and that they're all being taken to Guilst which is apparently a den of scum of villainy. The other B-tubers take this news kind of hard and a loli B-tuber starts crying. Ugly Fishman steps in to do some loli bullying but Rebecca protects her. The Ugly Fishman takes the opportunity to show off the digital binding app that controls their digi-ropes but is taken by surprise when Rebecca seems.. kinda.. into it. At least until Jinn puts a stop to Rebecca's journey of BDSM self discovery, reminding Ugly Fishman not to damage the goods. Ugly Fishman doesn't like being told what to do and reminds Jinn of his failure to catch his target. Jinn explains he encountered a troublesome gravity gear user, whom Rebecca instantly recognizes as Shiki. Then the Ugly Fishman points out Robofatsu didn't exactly do a great job either, with his acquisition of the full figured cooking B-tuber, and threatens Rebecca again them mercifully goes away. Left alone for a bit they all make introductions, though nobody knows poor obscure Rebecca, and she tries to encourage them that if they work together they'll find a way out of this and that she's not willing to give up on her adventure just yet.

Back on Edens Zero, as they race toward Guilst, Pino asks Witch if she can fix Happy but Witch explains that unfortunately healing is Sister's thing as the "Life of Edens" and was responsible for healing and repairing. Witch is the "Shield of Edens" and is the defender of the ship. She adds that the remaining two are Valkyrie the "Sword of Edens" and Hermit the "Mind of Edens". And suggests that perhaps Pino will be the "Light of Edens".

However, as interesting as all this is Shiki is getting impatient and just want the ship to get there faster. Witch advises caution but Shiki is understandably eager to get there, save Rebecca, and kick some ninja ass. Then Weisz shows up with none other than the girl we saw in the guild last week, Homura, who is seeking the demon king.

Then we get a bit of a flashback showing that Weisz walked into the guild just in time to see Shiki take off and hear Homura mention Edens Zero because apparently she thinks out loud (which is cute). He approaches her and, once she figures out he's connected to the ship, asks to be escorted on board in exchange for assisting in the rescue. Turns out her goal is to challenge the Demon King. Weisz agrees to do it.. on one condition. (It's going to be a date.)

Back in the present, there is a little concern over the fact that she wants to fight Shiki, that Weisz is making deals on thier behalf when he isn't even crew, and what this Homura girl can actually do. But she insists that right now rescuing Rebecca is her top priority and reveals she's highly trained with her own ether gear. An ether gear that Witch seems to recognize.

Meanwhile Rebecca and her group have finally landed on Guilst which can best be described as a "post-apocalyptic hellhole". Shortly after they get walked out of the ship as chain gang, a girl staggers out of the wastes and collapses. Ugly Fishman takes the chance to tell them all they don't want to end up like her they should be subservient to Illuga (Pervy Kermit). 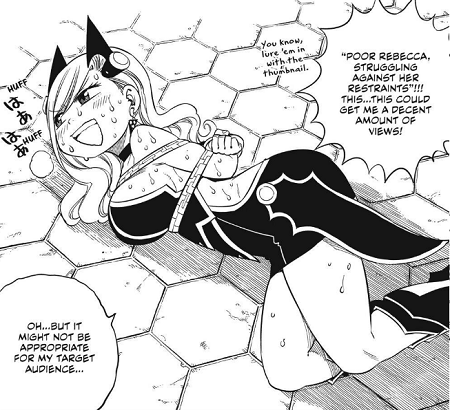 So... that got dark. Looks like Guilst is even worse than I think we were all expecting. Much worse than I was expecting for sure. Looking forward to Shiki and company doing the universe a favor and blowing that place up. Though it seems like it will offer a good chance to show off Rebecca's strong will and determination, also possibly the laser beam ether gear that was teased earlier, as I'm sure she's going to cause some trouble of her own.

Fortunately, it's not all dark and depressing. We met Homura who is almost certainly a future crew member. Judging from her personality she's probably a martial arts type. The gimmick of her thinking out loud seems funny and endearing too, especially combined with her serious personality. The fact that Witch recognized her Ether Gear makes me think she knows her master too.

Then possibly the biggest and coolest revelation of the names and roles of the Demon Lords Shining Stars. Witch is the Shield (Guardian). Sister is the Life (Healer). Valkyrie is the Sword (attacker?). Hermit is the Mind (advisor?). And something about Pino being the next generation and the Light. No idea what that means but it sounds cool to me.

Something I'm a little lukewarm on is Weisz continuing role as a selfish ass. It makes me wonder what exactly Mashima has planned for that character. He should be a crew member but strangely I feel like nobody actually likes him nor do they have any reason to. It seems to be an intentional choice but it's one that puzzles me a bit. He feels so out of place on Eden Zero right now. So hopefully this arc can help him find a better place on the crew than he's got right now. He'd make a good lovable pervert, if he could only get the "lovable" part figured out.

I really appreciated the color opening and spread. Seeing the Eden Zero in all it's black and gold dragon/spaceship glory makes me love it even more than I did before and the spread with Shiki on a throne-like chair was pretty awesome as well. Just a lot to like there. The rest of the chapter was solid for the most part. Mashima continues doing great work with dynamic expressions and brings so much life into his characters with them but on the negative side I thought there was a bit too much of defaulting to a blank while background. You lose a lot of atmosphere when you do that. Still, I have to credit the good background artwork of Guilst. Which came across and convincingly grim and menacing.

The pacing was fast and really packed a lot in there even considering how relatively long the chapter is at around 25 pages. All of it was fairly important too. The only real knock I have on it was the way the flashback flowed. For a flashback it went on too long for what it was. It was meant to establish a lot of things about Homura but I feel like all if would have landed better if it was done as a chronological scene. Especially the comedy bits. It made it seem bloated and unfocused to me. The only reason for it was to so she could suddenly appear on the ship. But that moment really surprised nobody so I just don't see the point.

Jam packed chapter with some sweet color pages and a lot of meat to dig into. A few imperfections aside, it was a very good read.

To discuss more about the manga, please visit our Edens Zero Section!

2 members and 0 guests have thanked Kaoz for this news