Like us on Facebook, follow us on Twitter! Check out our new tumblr page. :)
Manga News: Toriko has come to an end; but be sure to swing by and share your favourite moments from the series!
Manhwa & Manhua News: Check out the new Manhwa and Manhua shout-out (March 2016).
Event News: One Piece Awardshas concluded. Check the results Here!
MangaHelpers > News > Manga Reviews > Chapter Review: Edens Zero (23)
Homepage
Details
Archives 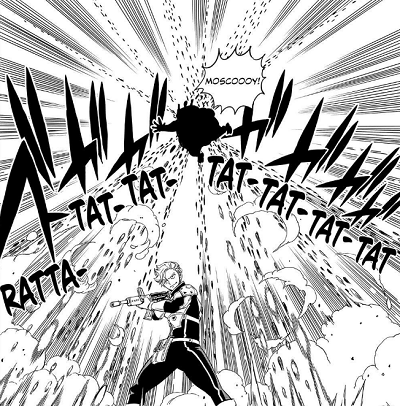 NOOOOOOO! Now we'll never know what happens when someone pushes his belly button!

This week's adventure starts with Shiki looking cool and heroically tenderizing the Illuga's face with his fist while Pino and Rebecca catch up on recent events. After hearing, with great relief, the news that Happy is ok and that the guild master is still mysterious, missing, and likely unharmed they decide to stop Shiki before the Pervy Toad goes from probably dead to DEFINITELY dead. Pino, uses her EMP to shut down his ether gear. As Shiki comes out of rampage mode Becky thanks him and, because her legs are still paralyzed, flashes him a pretty open view of her privates; which he seems to quite enjoy. (Your the best Mashima)

They are interrupted by the rest of the B-Cube idols who have escaped when their cell was mysteriously unlocked and found some Halloween/fetish costumes laying around to wear. (Your the best Mashima.) Shortly after making introductions though Jinn drops in but Shiki sees him coming, tells Pino to get everybody out of here, and gets ready to kick some space ninja ass. Some of the B-cubers are worried about Shiki but Becky assures them when it comes to a fight Shiki's got it covered. And they leave as Shiki and Jinn get ready to go all out.

Meanwhile back at the Rogue Out base, Homura is standing there as one of the the half dead android soldiers tries to shoot her in the back and is finished off by Weinz which she assures him was unneeded. Then she goes to investigate a strange ether flow beneath the floor that she notices but is interrupted by Weisz who points a gun at her and demands to know what she's hiding. She repeats her desire to challenge the demon king but Wiesz isn't buying it. He's convinced there is another secret and now that he knows how strong she is, he's not willing to let it go. She shrugs off the threat of the gun but Wiesz shows her why she shouldn't when Bosco comes flying and in he uses his ether gear to activating machine gun traps he remodeled into floor and destroys the flying weirdo without even turning around.

Then the scene switches to the Edens Zero where Happy awakens on the bridge alongside Witch who informs him the mission has been successful. So all seems well for about 2 seconds. Right up until the emergency sensors go off. Notifying them of a huge ether energy spike and planets disappearing. The Chronophage is heading to Guilist! (Couldn't happen to a nicer planet.) 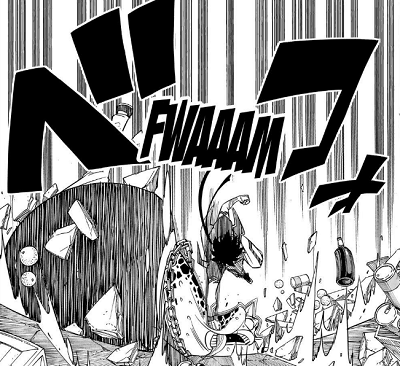 I was expecting Pervy toad to put up more of a fight but I have to hand it to Shiki when he's pissed off he doesn't hold back. Whether it's a berserker thing or just him having a temper, I find it interesting that he seemed completely willing to beat Illuga to death and beyond. Which in this single case I'm going to call 100% morally "ok". It's going to be interesting to see how he fights against Jinn. Will it be more controlled or will he go full rampage mode again?

Another very interesting moment was when the girls showed up the moment the fight was over having got out of their cell and had found those costumes. That's interesting because it seemed like it happened too soon after Pino used her EMP for Becky's assumption that it was responsible to be true. There just wasn't time for them to have escaped and gotten the costumes. Seems to me that the most likely explanation for this is the mysterious Guildmaster is being sneaky.

The showdown between Homura and Weisz was a bit strange to me. If he's protective of Shiki and Rebecca and thinks she's up to no good, that's fine. But deciding try and fight her seems reckless and a little stupid unless he's 100% sure. After all, the girl can't even think silently. How is she supposed to lie? So him suspecting her seems weird. The way the whole thing went down makes him seem like a traitor trying to keep her from discovering whatever is under that statue but I don't think that makes sense considering he's not even from this time period. So that whole scene was pretty puzzling to me.

Finally we get to the Chronophage. Why is that thing here? It can't be a confidence that Shiki and friends just so happen to be on this planet and now the monster is making a B-line to it. It's coming for something. It's gotta be. The question to me is what? It could be Shiki. It could be alternate universe Weisz. It could be whatever Sister's got going on in the basement. No matter what the answer is though it's going to be a pretty interesting wrinkle thrown into the end of this arc.

Artwork was really good across the board. Good action panels. Solid background work. Many fewer blank background shots than we've had recently. Be it an actual background or an action effect, something was usually there. And I appreciate that. Also need to hand it to Mashima for the really impressively pervy comedy artwork where Shiki is staring at Becky's.. *ahem*. That panel is truly impressive, in a way.

Pacing was fast. The set up of the last few chapters started to pay dividends this week as it's just flying into the good stuff. It's got a lot going on now and has managed to connect it all into one engaging story. So I'm pleased with everything on that front. In addition the Chronophage revelation made an excellent finale for the chapter.

A well above average chapter due to good artwork and a wealth of interesting plot elements. The only thing holding it back from going higher is that the Weisz character still seems to be struggling to find a natural fit in the series. Hopefully that will get ironed out soon.

2 members and 0 guests have thanked Kaoz for this news