Like us on Facebook, follow us on Twitter! Check out our new tumblr page. :)
Manga News: Toriko has come to an end; but be sure to swing by and share your favourite moments from the series!
Manhwa & Manhua News: Check out the new Manhwa and Manhua shout-out (March 2016).
Event News: One Piece Awardshas concluded. Check the results Here!
MangaHelpers > News > Shout-Outs > Create Manga Like a Pro with Comi-Po!
Homepage
Details
Archives 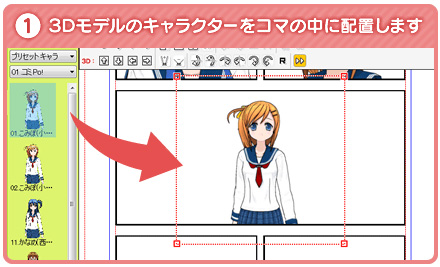 Today I had the opportunity to check out a new program that will allow people that have NO artistic talent to create their own full-fledged manga!

Comi-Po! uses an interface that is similar to a mix between Microsoft Word and Adobe Photoshop. You move a 3D character model that has a bunch of various poses, add backgrounds that are either pre-set or ones you've taken, and then add other effects and finalize it with your dialog. Enough with me explaining, check out a video I recorded of it! :P (sorry, not the best quality... )

Sure, it may seem like cheating... but not everyone can draw. So those of you with an awesome story to tell and who want to experiment with it in a manga form, this is perfect for you.

They'll be releasing things in sets with their first set being "School life".

You get your future manga dream all wrapped up in a package that costs ONLY 6,700 yen for the download version, or 9,700 yen if you want to buy it all neat and packaged up. This will go up for sell in December; just in time for the holidays!

I told them about how MangaHelpers has an amazing manga fan following and that a lot of members will probably want to use this product. Mr. Ono, the director of programming, said that they do have plans for releasing an English version! I also told him that there would probably be people willing to help localize it into other languages (you'd get paid, of course). So if any of you want to help be a part of getting this project out to a larger audience and feel like translating contact me.

Another thing to take note is, the manga you create is yours! You're free to sell, distribute, or use it in any way you see fit. The only thing you're not allowed to do is claim the characters as your own original creation.

They're giving out a demo version on November 1st to the first 500 people that sign up. So sign up before it's too late! (They'll choose people randomly after the first 500 sign ups.) The program is in Japanese so if you can't fill out the form perhaps it's a bit hard for you to use the program :p)

Let me know if you have any questions as well as if you would like to purchase it. Seeing as the more people from a certain country equals the higher chance it'll get localized for that country, it would be fantastic for you all to help spread the word about this program and get back to me if you're interested in it! Thanks!

0 members and 107 guests have thanked njt for this news

[Permalink]
Wait until some better manga package comes out

[Permalink]
I suppose the "school setting" isn't exactly the best one. But do remember Bleach started off that way too :D.

[Permalink]
I fear the day has come when people won't be needing traditional artists anymore. Look what happens to animators nowadays, they are replace by CGI animators.

Now the number of weaboo web-comics will triple.

[Permalink]
For those that are thinking negative about it, just think of it like this. This opens up new possibilities. For those that had no chance of getting artistic help they wouldn't need it to get their story started. Then, once someone started reading their story - and liking it, they could go from there and get people to help draw a better one.

Sure there will be a bit more webcomics because of this. But what are the chances of you seeing them unless you purposefully went looking?

[Permalink]
Ooo... This sounds really cool :D!! I wish I could understand Japanese though...

[Permalink]
@njt: Good point about the webcomics thing. I guess I won't be seeing any more weaboo webcomics.

[Permalink]
Seems mighty interesting. I'd love to try out some sort of trial version.

[Permalink]
The text baloons are excellent, I wanna use them in my work... but just that...

Any mangaka who gets depressed after seeing this can't be called an artist... nothing can win hand drawing, and as said, the people who don't know how to draw, can express their stories with this.

[Permalink]
I have to say after watching the clip, this seems pretty cool. The first set of characters or accessories seems a little limited though.