Like us on Facebook, follow us on Twitter! Check out our new tumblr page. :)
Manga News: Toriko has come to an end; but be sure to swing by and share your favourite moments from the series!
Manhwa & Manhua News: Check out the new Manhwa and Manhua shout-out (March 2016).
Event News: One Piece Awardshas concluded. Check the results Here!
MangaHelpers > News > Shout-Outs > Mangahelpers Featured Manga: 3/9 - 3/23 *Updated*
Homepage
Details
Archives

Mahmut is a young Pasha in Turkey's council of generals. The clouds of war are gathering over his country, and Mahmut is determined to keep the peace at any cost. Turkey's council is split between the warmongers and the pacifists. Among the pacifists is Khalil, an elderly Pasha with a selfless devotion to his country. Among the warmongers is Zaganos, also known as "The Poison Pasha," a jaded young man with a dark heart. Khalil becomes Mahmut's ally in protecting the peace, but Zaganos thinks that war will be of greater benefit to Turkey. Who will prevail? What will Mahmut do, if war proves to be inevitable?

Note: The manga is set in a fictional nation based on Turkey, which is not the real world Turkey.

Koen's Recommendation:
There are several things that I like in this manga. This shounen manga might be about a fictional Turkey; nevertheless its setting, the story and the concept going along with it seem quite realistic through which you easily get into the story. The focus isn't set on action but more on the events, coming along from the war and politics, which the main character has to deal with. The main character has some solid features by which you start to sympathize with him when he has to make important decisions regarding the burdens of war, politics,... Action is a part of the manga but the psychological view of Mahmut seems more important. The art is pretty decent too and it often appears story-bookish and detailed.

The only problem is that all of the Turkish terms can get a little confusing and it's sometimes a pain to keep looking back and fourth between the translation guides and the manga itself. Nevertheless, shokoku no altair might be your secret to be discovered.

Mori Buntarou is an incredibly sociophobic boy who only wants to be left alone, even in school. And so he decides to follow an especially annoying classmate's trial: The boy who is a skilled climber tells Mori that he wouldn't bother him anymore if he manages to climb the school building. Without a second thought, Mori tries...

From this breathtaking stunt on, Mori is addicted to climbing - The intense feeling of surviving combined with the total isolation on a mountain magically take Mori's attention. But climbing alone is a dangerous thing, and nobody could hope of surviving a solo trip on a real mountain...
And so Mori is torn between climbing alone and achieving the feats he could reach with his undoubted talent as part of a group.

I believe that even though it's not very popular yet, it's suited for almost every reader: It's attractive by graphics and action as well as heavy on symbolism and emotional development. Yet, to follow Mori's development, the reader always has to keep thinking to understand the numerous dreams, hallucinations, imaginations and comparisons which Sakamoto beautifully staged. This aspect becomes more and more important over the volumes: While there is barely any of such surreal sequences in the beginning, they take increasingly more space, and allow more and more insight into Mori as the story progresses.

Sakamoto's masterpiece keeps up highest quality in every regard and can absolutely face legendary Seinen like Vagabond. If you're not exclusively looking for superficial battle manga, give it a shot!

The story of the Ryu Sasakura and Eden Hall, a small cocktail bar in the Chiba area of Tokyo, where troubled customers come for the "glass of the gods", which with Ryu's assistance helps them to resolve their often highly emotional problems.

The above is the synopsis of the anime. In the manga, Ryu starts out working in a bar called Lapin.

vintagemistakes's Recommendation:
As the summary states, the crux of Bartender revolves around Sasakura Ryu, a renowned bartender who returns to Japan after spending the previous 8 years tending bar in Europe. He has a unique ability to read his customers and create the perfect cocktail for them and thus solving their problems.

Now with that said, I'll admit that it's a little far fetched to think that a simple cocktail can solve even the most serious problems, but its how it's conveyed that makes it interesting. It's not just 'here have this drink and your problems will be solved'... it goes a tad bit deeper than that. The cocktails, how you make them, and their history are intricately woven into these solutions.

All in all, it's a pretty lighthearted slice of life story that at times can be a bit trying and exaggerated. It's not the perfect story as things can sometimes seem a bit forced, but is definitely one that is very easy to pick up whenever you have the time. 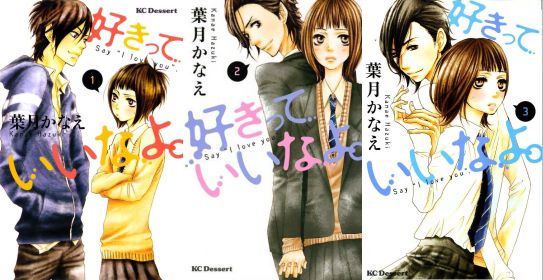 Mei Tachibana has spent her 16 years without making either a boyfriend or friends. One day, she injures the most popular boy in school, Yamato Kurosawa, because of a misunderstanding but for some reason it seems that he takes a liking to her and one-sidedly claims that they’re friends. Furthermore, he not only protects Mei from a stalker, he does it with a kiss…?!! [Karma Falls Scanlations]

baboysai's Recommendation:
If you read the summary, it sounds like a very generic Shoujo plot. After reading the first chapter, the one thing that invited me to read more was the art. I liked the drawing style because it's quite edgy and clean as opposed to the more rounded style of most Shoujo.

Beyond the first chapter though, what sets it apart is not really the art but the setting and pacing of the story. It's about a girl discovering her sexuality, and not slowly at that. The male lead supposedly has his principles, but he's not the conservative type, as more of his character is revealed. These two characters get into a relationship right off the bat to knock me off my seat.

What's so special about this manga is that the characters are all very human. I can see the sincerity of adolescence in this manga, the characters' zest for discovery in the peak of their youths. To me, the raw display of their emotions makes this a beautiful piece of work.
--------- Manga information ---------- 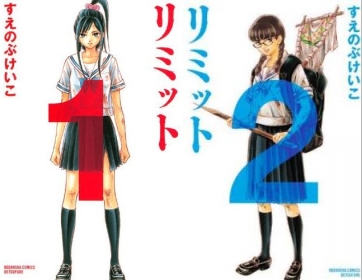 A group of girls are on their way to a camp when the driver passes out and causes the bus to drop from a cliff. The few survivors gather together and try to survive until rescue comes.

vintagemistakes's Recommendation:
What happens when the societal norms that govern all humans are thrown out the window and all that's left is our deepest, animalistic, and selfish emotions? This was the premise of William Golding's Lord of the Flies and is that of Limit as well. A story that takes a group and forces them into a situation that puts mankind's ability to follow societal norms against that of self preservation and the need to obtain a superior position to others.

Good vs Evil. Civilization vs Anarchy... call it what you want? It's a very deep and natural theme for one to immerse themselves into and live vicariously through. What would you do in that situation? How would you treat others that you weren't too fond of: would you work with them for the good of the community or try to rule over them? All very basic emotions that at one time or another, we all have resorted to whether we were aware of it or not e.g. picking teams in gym class.

Accompanied by this very intriguing topic, Limit is filled with interesting characters with fleshed out back stories; you really get a sense as to why these characters act they way they do - which makes it quite refreshing. It's a fun read if you are the type that is interested in psychological aspects of human nature.

1 members and 0 guests have thanked vintagemistakes for this news

[Permalink]
hmm, Limit does seem like a Lord of the Flies rip, but because of that I'm interested to see how that goes. Besides, high school is a more trying time than childhood, I guess. And the fact that they're all girls makes it more interesting, since I think girls are more viciously competitive than boys. :p