Like us on Facebook, follow us on Twitter! Check out our new tumblr page. :)
Manga News: Toriko has come to an end; but be sure to swing by and share your favourite moments from the series!
Manhwa & Manhua News: Check out the new Manhwa and Manhua shout-out (March 2016).
Event News: One Piece Awardshas concluded. Check the results Here!
MangaHelpers > News > Interviews > MH Translator Interview: Cookie-on-fire
Homepage
Details
Archives

Good evening folks, and welcome to another week of Translator Interviews. I am your amazingly handsome host, Queenofmuffins. Tonight's guest is the enigmatic Cookie-on-Fire, Seinen translator extraordinaire.

Translator Interviews is brought to you by:
Glagnar's Human Rinds - It's a buncha, muncha, cruncha humans!
And Coffee's Banner Workshop. It's Banner-rific! 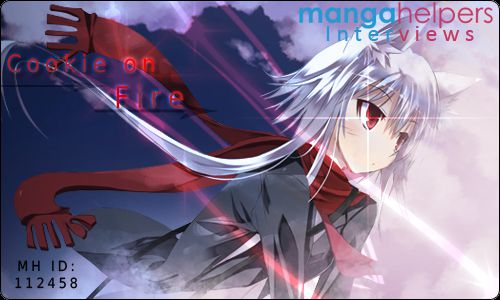 1. First off, thanks for agreeing to be my interview subject, Cookie-chan. Please go ahead and introduce yourself- what manga do you translate, which groups you work for or if you freelance, etc.

No problem. People usually refer to me as Cookie. I started out here over a year ago, and I guess translating has developed into a bit of a hobby.
A little bit about myself: I'm a 4th college (university, or whatever you will) student studying Japanese and computer science. While Japanese I'm very good at, CS is...

I'm currently working on quite a number of series, but I'm probably most known for Nononono?
I started out translating exclusively for Trinity BAKumA, but these days, I'll work for anyone if they present me with a series that interests me. But please, don't ask me about shounen manga, especially mainstream ones, because I will just reject them. I probably will only work on seinen series anyway.

2. Do you have any hobbies outside of manga translating?

Oh yes! I love video games more than anything else in the world... I think. But I only really play Japanese games. If I don't translate anything for a while, it either means schoolwork is killing me, or I'm going for a platinum trophy on the PS3.

3. What's the story behind your rather unique username?

Years and years ago, I was trying to think of a creative email address, and cookie.on.fire came to me very quickly for some reason. I didn't think much of it, but I thought "what the heck", so I went with it. And so far, I have never encountered any problems of having that name taken when I register for things.

4. Who is your favourite manga character? Why do you like them?

I generally don't like specific characters since I like a series as a whole. But I can say that my favorite manga ever is I"s. It ran on Weekly Shounen Jump back in 1997.
And I usually like characters who are tsundere to a degree, lol.

5. Why did you start translating manga? Can you see yourself doing it as a career?

I started because a certain member of Trinity BAKumA asked me on a gaming site if I wanted to translate manga. And there you have it.
I probably don't want to translate manga for a living. I mean sure, I'd like to put my Japanese knowledge to good use, but it would be nice if my job has something more to do with the gaming industry.

7. Hmmph. Acceptable. You may live.
Where do you see yourself in 5 years?

Um...probably working for a company of some sort. Grad school is a big no-no. Not unless I stay unemployed for years. I'm one of those weird people who look forward to working for someone else and be inside a cubicle all day.

Oh wait, I already do work in a cubicle.

8. How did you find out about Mangahelpers and why did you decide to join in? What parts of the site do you like most?

When I started translating, the certain person who recruited me told me to create an account, and I've been using it ever since.
To be honest, I don't really come on here other than to post translation and answer PM's. Although back in the days, I found the weekly manga shout outs to be an interesting read. These days, I'm too swamped with work to even think about any new series, lol.

9. What's your favourite manga to translate? Anything you want to pimp out here?

I like all the series that I work on. Or else I wouldn't be translating them. But the less text a manga has, the better I like it, haha. Blood Alone is good like that.
And um, shameless promotion of Nononono and Addicted to Curry?
Read them...please?

10. And now for the Random Muffin Question of the week-
Do you like sushi?

Oh...oops, should've looked down before answering question #6.
But I like almost all Japanese food. They make even the most plain things taste good.

And there you have it! Thanks for watching, folks. We'll see you next week- same time, same place.

Watch out for dragons.

[Permalink]
Thanks for translating Nononono!

I haven't read much else you translate, but give me time. XD Nice to know the origin behind the unique username.

(Is a grad student) And don't think I don't sometimes (read always) regret it. But some people need struggles to feel alive. :-P

[Permalink]
Short but really nice interview :)
I really enjoyed it =]

The PS3 Platinum thing made me lol, you are a total perfectionist when it comes to your gaming xD

[Permalink]
It's a great interview.

Thanks for the translation of Nononono!

Feminine, huh. Maybe it's because I'm a girl lol.

[Permalink]
I think he was just surprised I hadn't threatened to kill anyone. XD

[Permalink]
Yeah, haha. The questions were very...tame when you sent them to me.
And then it went under some editing, I see :9

If there's anything you want to change, just tell me. ^_^