Like us on Facebook, follow us on Twitter! Check out our new tumblr page. :)
Manga News: Toriko has come to an end; but be sure to swing by and share your favourite moments from the series!
Manhwa & Manhua News: Check out the new Manhwa and Manhua shout-out (March 2016).
Event News: One Piece Awardshas concluded. Check the results Here!
MangaHelpers > News > Shout-Outs > Mangahelpers Featured Manga 3/30 - 4/6
Homepage
Details
Archives

Hello everyone!! Welcome to the next great installment of Mangahelpers Featured Manga News Post. :) As you are probably already aware, every two weeks (unless it is a special edition like this weeks :p) we will be featuring a few series that we think you will enjoy and/or could use some love discussion wise. Along with this news post, these series will be stuck on their respective demographic boards. So be sure to check them out if you haven't and go discuss them if you have!

Many thanks go out to Shinsatsu for making the lovely leaderboard banner. You can see more of his amazing work in his gallery. :) 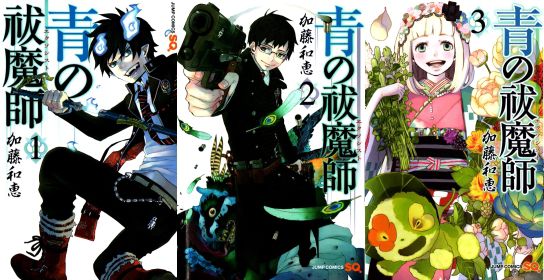 This world consists of two dimensions joined as one, like a mirror. The first is the world in which the humans live, Assiah. The other is the world of demons, Gehenna. Ordinarily, travel between the two, and indeed any kind of contact between the two, is impossible. However the demons can pass over into this world by possessing anything that exists within it.

Satan is the god of demons, but there's one thing that he doesn't have and that's a container in the human world that is powerful enough to hold him!!
For that purpose, he created Rin, his son from a human woman, but will his son agree to his plans, or will he become something else...? An exorcist?

Recommendation by Saladesu:
The premise in one sentence: main character is the son of Satan, foster father dies, main character vows to take revenge/defeat Satan using the very demon powers he never wanted or even knew he had. Oh, how many times have we heard this premise before? Countless, I'm sure. But wait - don't let that stop you from reading Ao no Exorcist, because if you do you will regret it. Ao no Exorcist is a series that is so much more than its premise will have you think. It is one of those series that takes an overused, hackneyed plot line, executes it exceptionally, and turns it into gold.

The art is pretty good, albeit sketchy at times, and the story strikes a good balance between action, drama and comedy. It knows when to be serious and when to be funny, and trust me, it's real good at doing both. The characters are the true selling point of this manga as they are all very unique and have interesting back stories that will make you invested in each one of them and want to know more. As the story progresses, you'll also see that it isn't really as cliche as you might have thought upon reading the summary.

All in all, Ao no Exorcist is a very enjoyable read I would recommend to anyone who enjoys fantasy, action or supernatural manga. It also ranked 5th on the recent "Comics Bookstore Staff All Over Japan Recommend 2011" poll, a testament to the high quality of this great manga. 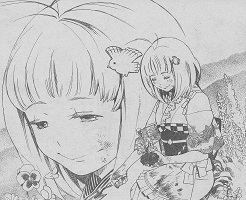 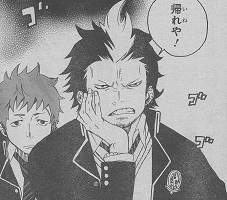 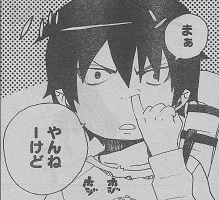 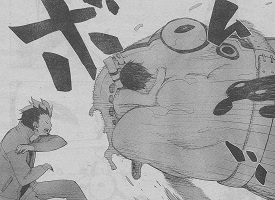 Yuuki kun was one of the star players on his junior high school team, along with his childhood friend Shinichi. Due to a promise that he made with his female childhood friend Miyuki, Yuuki kun has decided to take the long road to the J League by joining a normal school club and winning tournaments, instead of taking recommendations like Shinichi did....

When he checks the club of his selected school, the best club in the country; he quickly notices that the club is completely devoid of any members except for a weird girl that goes by the name of Fujisaki Rin. She along with her friend, Ayane, seem to have driven everyone out of the team....

But do Rin and Ayane really want to dissolve the soccer club or could they possible want something else? And just what exactly is the promise that Yuuki made with his childhood friends? Well, regardless of the answers, it seems that Yuuki isn't in for smooth sailing, as he completely seems to have fallen into Fujisaki's hands...

My Thoughts:
To be perfectly honest, as much as I love sports in general, I have never really been into sports manga. They just never really did it for me. But after stumbling upon Shuukyuu Shoujo, I thought I'd give one a try - a sports oriented manga with some ecchi thrown in. What is the worst thing that could happen, right?

Well first off, this really isn't as much of a sports manga as it is a ecchi/harem manga. The soccer aspect of the story definitely just comes last and seems to be used just as means to put characters into certain situations. Now, don't get me wrong, that isn't necessarily a bad thing, it just depends on what you are looking for. And if it is a mindless ecchi/harem story... you should check it out.

Please note that it does contain some nudity. So if that sort of stuff isn't your cup of tea, then Shuukyuu Shoujo isn't for you.

Are there gods in Japan? In a very literal sense, that's what Ichiyou and Tenkou want to know. Collecting gods and taking them home to their own country is actually their job. While in modern Japan, they bump into the school girl Nozomu, who is an aspiring writer. She is completely stunned by their matter-of-fact explanation of their mission, but also excited that such a novel-like event is happening to her in real life. Will Ichiyou and Tenkou be able to find the gods in Japan, or have they all vanished?[tethysdust]

My thoughts:
If the cover and preview images look familiar, that is because Haigakura is by Takayama Shinobu: the author and Artist of Amatsuki. And like Amatsuki, Haigakura is a beautifully illustrated tale with great characters, surroundings and a good premise.

The main story of Haigakura revolves around a legend called the Four Misfortunes. A legend that states that once upon a time there were 5 mountains and residing in the depths of four of these mountains were four terrible and brutal Gods. Two of them managed to escape and when they did, they split the earth and the mountains crumbled. And it is the job of the Kashi's job to find these Gods and bring them back. It is a pretty simple premise but as with Amatsuki, it is one that is text heavy and takes time to develop.

However, unlike with Amatsuki, Haigakura is filled with more comedic relief situations that bring a lighter side to the whole story. The interaction between characters is light and fun - especially between Ichiyou and Tenkou. Their relationship comes off as much more than that of Master/Subordinate. Whether it is through self inflicted mishaps or just general fun, there is a sense of admiration and companionship between the two. It is a pleasant read and one that I think many would enjoy. :) 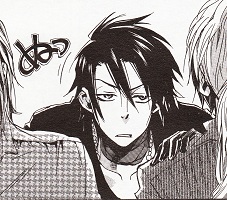 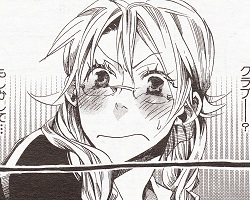 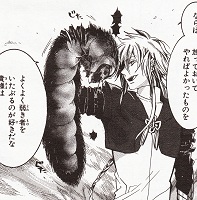 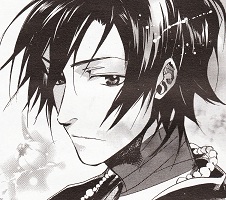 [Permalink]
Ao no Exorcist! :3 Read it if you don't already~!