Like us on Facebook, follow us on Twitter! Check out our new tumblr page. :)
Manga News: Toriko has come to an end; but be sure to swing by and share your favourite moments from the series!
Manhwa & Manhua News: Check out the new Manhwa and Manhua shout-out (March 2016).
Event News: One Piece Awardshas concluded. Check the results Here!
MangaHelpers > News > Manga News > Chagecha Axed + Free Morning 2 Magazine Online + Viz + Ero Manga Online
Homepage
Details
Archives

+ posted by c_k in Manga News on Oct 29, 2008 10:44
Canned Dogs reports that gag manga Chagecha, Sawai Yoshio’s new serialization in Shounen Jump, will end with only eight weeks in Jump. Sawai Yoshio is most well known for his manga Bobobo-bo Bo-bobo which is about a man named Bo-bobo who decides to take a stand against a cruel dictator who mandated the hunting of all hair in the Maruhage Empire and has nonsensical adventures with his sidekick snacks as they lead their hilarious rebellion against the Empire. Bobobo-bo Bo-bobo is complete with 21 volumes and is currently being published in Viz's Shonen Jump magazine.

Kodansha is posting three issues of manga magazine Morning Two online for free due to complaints about the difficulty in finding and purchasing said magazine. You have to download Crochet, a free comics reader which works for Macs, in order to view the magazine, which is in Japanese. Morning Two is a sibling magazine of the more popular magazines Morning and Evening. Morning Two mainly publishes foreign authors and avant-garde titles and includes such titles as Saint Young Men, Gunjou and Peepo Choo.

Yukari Shiina has translated this page on MangaBlog, which explains why Kodansha has decided to do this:

It’s been two years since we launched Morning Two. It’s still just two years old, but it has been very well received more than we had imagined before we launched. We, however, have heard people’s complaints that it is difficult to find the magazine in bookstores or convenience stores where you can easily find many manga magazines here in Japan. In the meantime, the sales of the paperbacks (tankoubon) into which the series of Morning Two are compiled are dozens of times bigger than the circulation of the magazine itself.

We are proud of our manga in Morning Two and think that the magazine has a potential to reach people who haven’t read it. Therefore, we would like to give you an opportunity to read our magazine and enjoy it! We are afraid that the magazine is only in Japanese, but we hope that you enjoy it!

We also hope you read Morning Two for free and then use the money for other manga works. We think that there are tons of interesting manga out there. If you find good manga, enjoy it, and love it, we, the department of Morning Two, would be very happy!!

In the next three months, we will keep uploading Morning Two magazines for free.
Here is the schedule:

Issues #14 and #16 include Peepo Choo, the manga created by an American artist, Felipe Smith!

In order for you to read our free magazine, you have first to install software (Crochet) on your computer. You can install it for free. To install the software, you click the word “Crochet” next to the orange square button.

Now that you are ready to enjoy our magazine, please click the orange button and read it!!

Viz's December issue of Shonen Jump and Shojo Beat will contain an extra section featuring video games. Shonen Jump will have a special extended “Games We Love” section that announces the magazine’s first-ever game awards for 2008, reviews on games, a chance to win a Wii as well as the latest information on the Naruto games made by Namco Bandai, Tomy and Ubisoft. Shoujo Beat will also include information on girl-oriented and vampire-themed games, a chance to win a Wii as well as a special 11-page insert containing the Official Guide to Vampire Knight which will include a detailed timeline of key storylines, a two-page chart of Vampire Knight's cast of characters, answers to reader questions, and a preview of the new Vampire Knight anime in Japan. 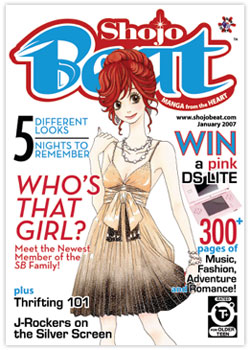 [Permalink]
Nothing was mentioned as official in the ToC thread about Chagecha ending....

[Permalink]
I only reported what I read from the Canned Dogs site.

[Permalink]
These fools don't know what they're doing!! Why'd the drop a good series like Mx0 and put something that was only going to last 2 months?? I say good 4 them!