Like us on Facebook, follow us on Twitter! Check out our new tumblr page. :)
Manga News: Toriko has come to an end; but be sure to swing by and share your favourite moments from the series!
Manhwa & Manhua News: Check out the new Manhwa and Manhua shout-out (March 2016).
Event News: One Piece Awardshas concluded. Check the results Here!
MangaHelpers > Manga > Browse > Desert Punk
Home
Chapters
Translations
Thread
RSS 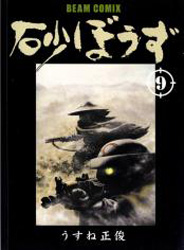 After a nuclear war turns most of the Earth into desert wastelands, surviving humans had used the sands in order to survive. One of them is a professional mercenary named Sunabozu, who makes a living by hiring himself out to anyone who needs his talents.

Why are there no chapters of this manga? I've already had the enormous pleasure of watching the anime adaption of this story dubbed on Neflix. Unfortunately, it seems that no scanning group wants to make the manga available to the fans. Stop working on other shitty stuff and focus on something that clearly fell through the cracks. From what I've read the manga and the anime have some serious differences. This story is becoming increasingly popular and the fans (like me!) are going to want the manga. Permalink " "
Review by Goral

Sunabōzu is a unique manga, interesting from start to finish and even though humour wasn't too refined (it was more of a college humour) I consider it as one of the most valuable reads I've had in my life as a manga reader. Paradoxically, despite it's often primitive jokes or out of the top behaviour (sometimes even cartoonish) of characters, there are not many manga that depict reality as well, even if it's in a setting almost completely unknown to us. The same goes for characters who we see as made from flesh and blood and not ink and paper. It's very rare to find characters such as these. Since the world they live in is more cruel than the one most of us know and here motto "survival of the fittest" is a fact and not just an empty slogan, characters behave very logically in such conditions. The main hero (and most of other characters that have at least half a brain) are pragmatist and/or opportunists. If there was a chance to screw someone over they don't miss it, if the opponent has an advantage they don't think twice about withdrawing. The latter action is something that most mangakas do not consider. Main hero would run ?! That's ridiculous. He can't. He must stand firmly and fight with his foes and surely he will defeat them because of sheer fighting spirit... Well, not in Desert Punk (but in Arms Peddler unfortunately yes). There is no honour here, no pardon, what matters are results and effectiveness. It reminds me of Fallout game (but not crappy Fallout 3 but Fallout 1 - godly game) and maybe that's why I've loved it so much. It also reminds me of Firefly (the best tv show ever) and I haven't found any cartoon/anime or other tv series that would get even close to it.
Even though the plot isn't very original, carrying it out is. Desert Punk surprises (in a good way) in every chapter. Often I had to pick up my jaw from the floor, even more often I laughed (my sense of humour isn't too refined :P) and sometimes my adrenaline level would rise. There are only few manga/anime that could trigger such reactions from me and even fewer that managed to maintain it from start to finish (Trigun, Cowboy Bebop, Legend of Galactic Heroes, SPT Layzner, FMA, Urasawa's mangas, Romeo no Aoi Sora, Kemono no Souja Erin, Kaiji and that's about it). So if you're looking for a non-schematic, action manga, something that would allow you to relax and something you won't forget than this manga is for you.

Manga and anime are unfortunately very under-appreciated. This title has disappeared in tons of sh*t that floats around and are considered as masterpieces when they can't even compare to Desert Punk. Permalink " "