Like us on Facebook, follow us on Twitter! Check out our new tumblr page. :)
Manga News: Toriko has come to an end; but be sure to swing by and share your favourite moments from the series!
Manhwa & Manhua News: Check out the new Manhwa and Manhua shout-out (March 2016).
Event News: One Piece Awardshas concluded. Check the results Here!
MangaHelpers > Manga > Browse > St&rs
Home
Chapters
Translations
Thread
RSS 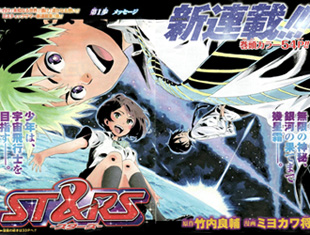 On August 10 of 2019, humanity received a signal, which was verified for its integrity by hundreds of scientists, from an alien life form containing one message: let us meet on Mars on July 7, 2035. Thus began the creation of a space agency representing Earth as a whole named ST&RS. From there, things progressed quickly with man re-landing on the moon in 2022 and constructing many space stations orbiting Earth and the moon. The Space Academy was created to train the upcoming generation of ST&RS.

The same August 10th that Earth received the message, Shirafune Maho spoke his first words and it was “Mars.” Since then, Maho has been an astronomy freak who has nothing but the universe on his mind. He decides he is going to apply for the Space Academy along with his childhood friend, Hoshihara Meguru, and recent transfer and super smart classmate, Amachi Wataru. The trio begins their almost impossible journey of being accepted into the school where only 1% of the applicants are allowed into the academy. [vyc]