Like us on Facebook, follow us on Twitter! Check out our new tumblr page. :)
Manga News: Toriko has come to an end; but be sure to swing by and share your favourite moments from the series!
Manhwa & Manhua News: Check out the new Manhwa and Manhua shout-out (March 2016).
Event News: One Piece Awardshas concluded. Check the results Here!
MangaHelpers > Manga > Browse > Trigun Maximum
Home
Chapters
Translations
Thread
RSS 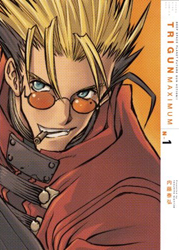 From DMP:
Our hero Vash the Stampede disappeared for two years after blasting a crater onto the moon above the desert planet he saved from annihilation. But with good people and bad alike trying to track him down, he won't stay lost for long! Count on more crazy gunslinger action, new dastardly villains...and a new outfit, to boot!

Note:
Nightow changed publishers to Shonen Gahosha and the series continued to be serialized in Young King Ours magazine. Due to the original publisher retaining the name Trigun, Nightow had to change the title to Trigun Maximum, which isn’t a sequel; just a new name for the rest of the same series.