Like us on Facebook, follow us on Twitter! Check out our new tumblr page. :)
Manga News: Toriko has come to an end; but be sure to swing by and share your favourite moments from the series!
Manhwa & Manhua News: Check out the new Manhwa and Manhua shout-out (March 2016).
Event News: One Piece Awardshas concluded. Check the results Here!
MangaHelpers > Manga > Browse > 3×3EYES
Home
Chapters
Translations
RSS 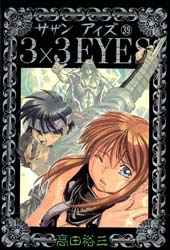 Through a strange series of events, a young man named Yakumo Fuuji becomes the immortal slave of the last of a race of 3 Eyed immortals. The immortal, Pai, absorbs his soul to save his life, making him immortal in the process. Now, he begins a journey with the female immortal in an attempt to find a way of becoming human. Of course, there are many complications along the way, not the least of which being that the immortal is a female with a split personality, one achingly cute and the other being no-nonsense destructive power, and romances that develop between.