Like us on Facebook, follow us on Twitter! Check out our new tumblr page. :)
Manga News: Toriko has come to an end; but be sure to swing by and share your favourite moments from the series!
Manhwa & Manhua News: Check out the new Manhwa and Manhua shout-out (March 2016).
Event News: One Piece Awardshas concluded. Check the results Here!
MangaHelpers > News > Shout-Outs > New Manga Shout Out: 2/16/15 - 2/22/15
Homepage
Details
Archives

Welcome to the next New Manga Shout Out. This weekly article introduces you to manga that are new and/or have not been scanlated yet. This week features a henchman in an evil organization, humans with powers and an all-girl kendo high school. Remember, if you like any of the series, favorite them. Don't forget to also thank the various people who feed your manga addiction. ^_^ Translators and Scanlators, please check out these series and see if you can spread some more manga love~ 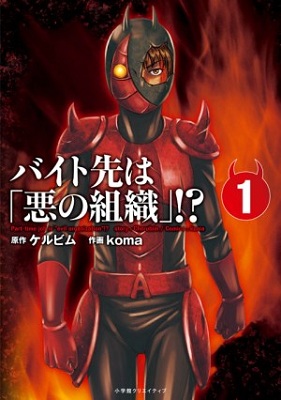 Arihisa Aokura needs money. He needs money in order to support his family of orphans and earn a living at the same time. Looking online for potential employees, he finds a posting for a part time job in an "evil organization." Seeing that the pay and benefits were fairly substantial, he took the chance and took the interview. He was somehow hired and now has to work as a henchman inside the evil organization "Antares." Will he be able to survive the onslaught of missions against heroes while providing for his orphan brothers and sisters? 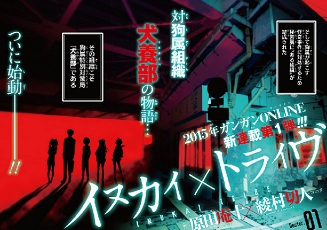 In this world, there are those who look like humans but are actually beings with supernatural power. In order to respond to crimes committed by these kinds of people, an organization that employs some of their number has been established. Kurohimeyama Eve is a member of this organization, and she is also a teenage girl that has "Oni" powers. One day, she goes to meet a new member, Ichizuka Senya, who is a boy with dangerous shadow powers and a bad personality. In front of the other girls in the organization, though, he seems to act perfectly nice. What's even worse, he's transferred into her private religious school! Kurohimeyama's once-peaceful life will never be the same! 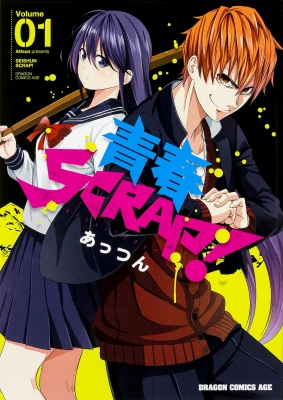 A new program has been set in place for a certain area, where children are separated by gender into eastern and western territories. They're raised with no contact with the opposite sex, and made to only focus on their studies. Of course, there are a few bad apples, and the worst of these are sent to a co-ed school with the troublemakers from both sides. Unfortunately, this school soon became known as a place where the teenagers would battle to determine who was the strongest, and many boys and girls tried to be sent there.

At this school, the girls have an advantage, since the boys mysteriously get nosebleeds whenever they look at them. However, the strongest girl, Jun, is shocked to find that the strongest boy, Kyo, doesn't get a nosebleed when he looks at her! It turns out that both of them have had some experience with the opposite sex in the past, and they both have embarrassing secrets in the present... 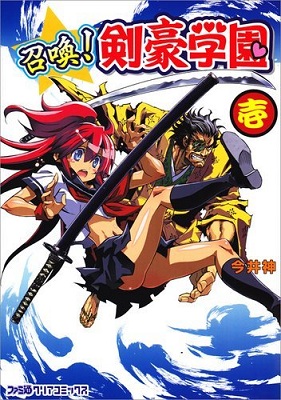 This is the story of an all-girls kendo high school. All of the girls there are descendants of famous swordsmen from Japan's history. One girl is a relatively new transfer student, Hanyu Jubei, and a descendent of the famous Yagyu Jubei. She has never practiced with a sword, though it is in her ancestry. On her sixteenth birthday, the high school has a friendly match with another school, whose all-male team is dismayed to be roundly defeated by little girls. If Jubei is going to win her match, though, she will have to find a way to unlock the power of her ancestor! 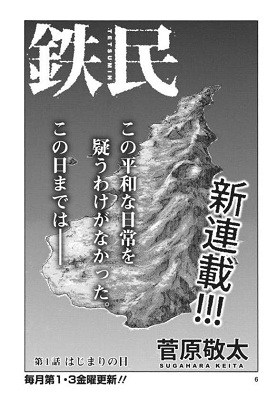 This is a story about Miro Takizawa, who was born and raised on the peaceful island of Sasaraijima, an island surrounded by mountains and ocean. This introverted girl has lived her first year in high school peacefully, falling in love and trying to make friends. Her peaceful life takes a sharp turn for the worse as she discovers the secrets of the "Tetsu-min." Dark secrets await her as these horrific entities endanger the inhabitants of this once peaceful island. 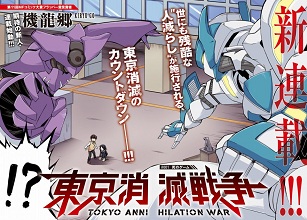 They were instructed to kill each other in the city of Tokyo until 10,000,000 people were eliminated from the city. This genocidal game known as "Save the Earth" happens every 4 years. An over-populated city is randomly chosen to become the forced killing grounds of its denizens, and each person has to kill the other. They have no choice, and no escape. Akira Suwa must now fight to protect his loved ones and himself in this genocidal game.

=======================================================
Note to all scanlators: If you recently started scanlating a new manga series (with about 5 or less chapters released) and would like your manga to be shouted out in the next New Manga Shout Out, then please PM me. Please include:
This is what tethysdust said this week:
Quote:
None really caught my attention this week, but I think they would be fun if you're into their particular type of story. Kengou Gakuen reminds me of 'historical figures as moe schoolgirls' manga, though these schoolgirls are descendants and not the historical figures themselves. Inukai Tribe seems like it would be a good one for people looking for a supernatural battle shounen manga. Seishun Scrap seems like a combo of delinquent school stories and the 'girl and boy stuck together by accidentally learning each others' humiliating secrets' plot.


My opinion:
Baito Saki wa "Aku no Soshiki"?! - If you're interested in seeing the point of view of a henchman in an evil organization with some comedy thrown in, then this may pique your interest.
Inukai x Tribe - On the other hand, if you're in the mood for a supernatural action manga, then this would be right up your alley.
Seishun Scrap! - This may be an interesting take on what would happen if guys and girls were raised separately. It may be interesting to see what embarrassing secrets they each have. If you like action and some humiliation, maybe you should check this one out instead.
Shoukan!! Kengou Gakuen - If you're into kendo and action, then you might want to check out this manga as well...
Tetsumin - However, this manga, unlike all the other action manga, is a suspenseful horror. If you're in the mood for a mystery, then you might try out this one instead.
Toukyou Shoumetsu Sensou - Unlike all the other action manga, this one features robots. If you like robots mixed in with the action, then you might like this one instead.

If you haven't done so already, check out the scanlations of the mangas from previous shout outs which have been recently scanlated: comedy Dagashi Kashi (MH link), sci-fi mystery Chikyuu no Houkago (MH link), slice of life cooking manga Amaama to Inazuma (MH link).