Like us on Facebook, follow us on Twitter! Check out our new tumblr page. :)
Manga News: Toriko has come to an end; but be sure to swing by and share your favourite moments from the series!
Manhwa & Manhua News: Check out the new Manhwa and Manhua shout-out (March 2016).
Event News: One Piece Awardshas concluded. Check the results Here!
MangaHelpers > News > Shout-Outs > New Manga Shout Out: 5/12/14 - 5/18/14
Homepage
Details
Archives

Welcome to the next New Manga Shout Out. This weekly article introduces you to manga that are new and/or have not been scanlated yet. This week features a new metal-melting bacteria, a high school detective and a maid robot. Remember, if you like any of the series, favorite them. Don't forget to also thank the various people who feed your manga addiction. ^_^ Translators and Scanlators, please check out these series and see if you can spread some more manga love~ 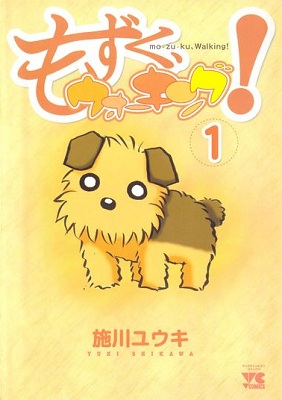 This peaceful manga features the daily life of Fujimura Sachi and her dog Mozuku. Sachi also has a quirky mother, a father who wears glasses, and a little brother. Sachi spends a lot of time caring for and walking Mozuku, who is a very clever dog with interesting thoughts on his world and the humans that share it. 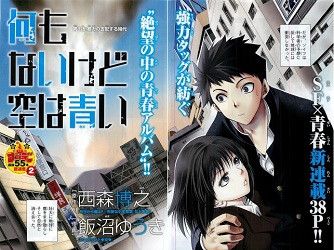 Scientists predicted an imminent meteor impact on Earth that would annihilate civilization, but contrary to their prediction, the meteor missed Earth. Though avoiding immediate destruction, humanity found that the meteor left behind something in its wake, something that would change the course of civilization forever: a new form of bacteria that ate through all known metals.

Facing this new era where all metals turn to ash, Jinkichi and his classmates will have to survive with little help from the Japanese government. Some of his classmates have already begun to understand that the norms of the past have collapsed, and lawlessness will be the new law. Jinkichi will have to protect himself as well as his classmates from the violence that ensues. 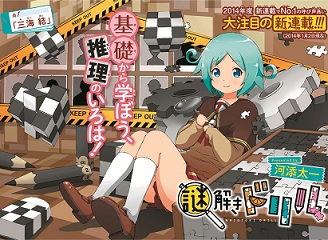 Mikai Yui is a high school girl detective... sort of! She's already 19, but she's on her third repeat of the final year of high school. It seems like people get murdered around her all the time, but she's always excited to declare her expertise and trip over the body. Her "assistant," who she calls "Rinrin," is actually just a classmate (not an assistant or even a friend), who happens to be a lot better at figuring out murder mysteries. Their first murder of the series happens on a school excursion, when a maid finds a man stabbed to death in his hotel room! 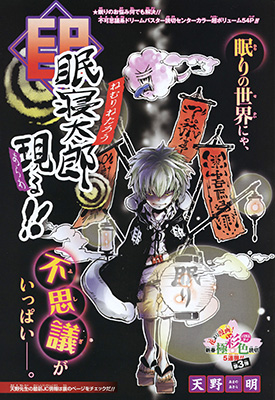 Nemuri Netaro will solve your sleeping problems, whatever it may be. Whether you can't sleep, have constant nightmares, or simply want to see better dreams, he's there to help. His latest customer, Tonko, has always been haunted by the same nightmare every night before she transfers to a new school. Tonko will now have to face the astonishing facts of the dream world with the help of Netaro! 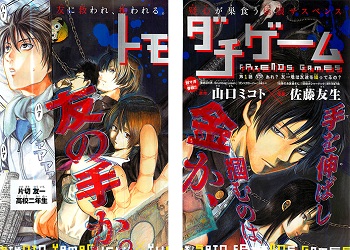 Katagiri Yuichi believes that friends are more important than money, but he also knows the hardships of not having enough funds. He works hard to save up in order to go on the high school trip, because he has promised his four best friends that they will all go together. However, after the class's money is all collected, it is stolen! Suspicion falls on two of Yuichi's friends, Sawaragi Shiho and Shibe Makoto.

Soon afterward, the five of them are kidnapped, and wake up in a strange room with a character from a short-lived anime. Apparently, one of them has entered them into a "friendship game" in order to take care of their massive debt. But who was it, and why did they have such a debt? Could they have stolen the money from class to pay for entry into the game? Katagiri and his best friends will have to succeed in psychological games that will test or destroy their faith in one another. 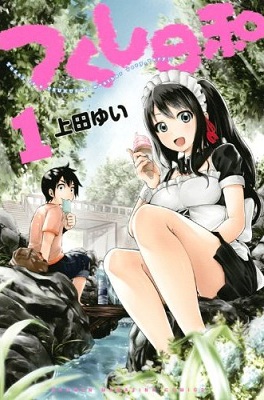 The age of the maid robot has begun! Now, each family has at least 1 maid robot in their household, and Souta's family is no exception. Souta grew up with his maid robot since he was a young boy. He has learned that there are people out there that have fallen in love with their maid robot, but he is determined to not be one of those people.

His maid robot, Tsukushi, will do whatever it takes to make her master happy!

=======================================================
Note to all scanlators: If you recently started scanlating a new manga series (with about 5 or less chapters released) and would like your manga to be shouted out in the next New Manga Shout Out, then please PM me. Please include:
This is what tethysdust said this week:
Quote:
Tomodachi Game follows the pretty popular trend of putting high schoolers into some bizarre game situation, but I thought this one was pretty interesting. At least from the beginning, it seems more psychological than violent, and like the games are going to continue to be about picking at the cracks in the group's close friendship. Mozuku Walking was really cute, especially with the dog's perspective. Nazotoki Drill was an odd one... I'm not sure how well the silly humor tone matches up with the murder mystery plots.
Here's what DrCoke had to say:
Quote:
"Nanimo Naikedo Sora wa Aoi": This one might seem to have a slow start, but I think it has potential. The main character is definitely likable.

My opinion:
Mozuku, Walking! - If you like dogs, then you should check out this manga.
Nanimo Naikedo Sora wa Aoi - If you're into sci-fi, then you may want to check this one out. It seems a bit interesting to see how a new bacteria could affect the eco-system and the fall out from it. I'm probably the most interested in this manga of the bunch.
Nazotoki Drill - This seems like it'd be good for someone who wants some quick comedy mixed in with murder mystery. Maybe if you're into "Conan" then you'd want to check this out.
Nemuri Netaro Arawaru!! - If you want a quick supernatural fix, then you'd want to take a look at this. The idea of going into dreams isn't new, but maybe this will be a unique take on it.
Tomodachi Game - If you like survival games, then this is right up your alley. There's nothing really new about this game, except I guess it's due to a debt. Still, it may turn out to be interesting...
Tsukushi Hiyori - Two words: maid robots. If you want something moe to check out and you like maids + robots, then you should check this one out.


If you haven't done so already, check out the scanlations of the mangas from previous shout outs which have been recently scanlated: historical romance Nobunaga Kyousoukyoku (MH link), supernatural ecchi manga Inugamihime ni Kuchizuke (MH link).

8 members and 1 guests have thanked c_k for this news