Like us on Facebook, follow us on Twitter! Check out our new tumblr page. :)
Manga News: Toriko has come to an end; but be sure to swing by and share your favourite moments from the series!
Manhwa & Manhua News: Check out the new Manhwa and Manhua shout-out (March 2016).
Event News: One Piece Awardshas concluded. Check the results Here!
MangaHelpers > News > Shout-Outs > New Manga Shout Out: 6/9/14 - 6/15/14
Homepage
Details
Archives

Welcome to the next New Manga Shout Out. This weekly article introduces you to manga that are new and/or have not been scanlated yet. This week features a boys swim team, a young man with amnesia, and the strongest man battling the strongest animals. Remember, if you like any of the series, favorite them. Don't forget to also thank the various people who feed your manga addiction. ^_^ Translators and Scanlators, please check out these series and see if you can spread some more manga love~ 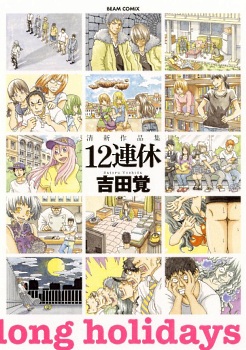 A collection of 12 short stories (& one extra) by Yoshida Satoru. The first features a woman who quit her job one summer, and is trying to find a happier life. The next few feature an unconventional method of getting rid of a ghost, and some annoying peeping neighbors who underestimate the cleverness of their large-chested target. 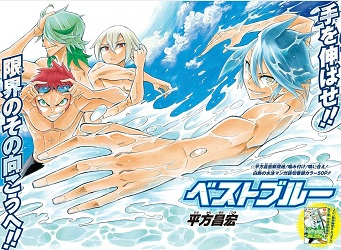 Kagura Mio is the manager of her high school swim team. Three of the first year boys on her team, though, spend all their time bickering and mocking her idea of "teamwork." Then a fourth boy joins the team, who supports her idea of competing as a medley relay team. Each of the boys is extremely skilled in one of the four strokes--backstroke, breaststroke, butterfly and freestroke--but three of them insist that they are 'sharks' and won't swim together. Will she be able to get these skilled swimmers to work together as a team? 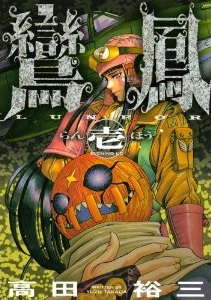 Chigira Yuusuke is a young man who seems to have lost his memory. He spends his peaceful days working part-time and wearing a "Pale Rider" mask outside of work. One day, his life changes due to a fateful encounter with a young woman named Amemiya Miyako, who he meets shortly before an unexpected attack turns Tokyo into a sea of flames. What is the purpose of this attack, and could Amemiya hold the keys to unlock Chigira's past? 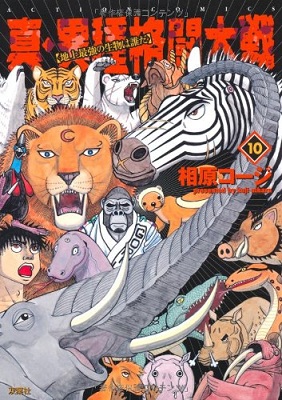 Hagane has attained the title of the strongest man in the world after becoming the champion of the ultimate mixed martial arts tournament. After winning the tournament, he was contacted by a mysterious man who questions Hagane's title. Taking up the challenge, Hagane follows the mysterious man to a far away place, a place where he will face a new type of battle. He must now face the strongest creatures of nature, ranging from the massive elephant to the king of beasts, the lion.

=======================================================
Note to all scanlators: If you recently started scanlating a new manga series (with about 5 or less chapters released) and would like your manga to be shouted out in the next New Manga Shout Out, then please PM me. Please include:
This is what tethysdust said this week:
Quote:
12-renkyuu had some fun and varied stories. I get the feeling Ranhou could shape up to be a pretty interesting story-- it seems to be building up a complicated situation. Best Blue was nothing new, but probably fun for anyone who wants a short high school sports story.

My opinion:
12 Renkyuu - If you're interested in reading a volume of slice of life short stories, then you may want to check this out.
Best Blue - This one would be good for those who are a fan of swimming. I don't really think there are many manga about this sport so if you want to see the struggles of a team to work together (and you know, how that'll turn out), then check this one out.
Ranhou - On the other hand, if you like sci-fi and action, with a bit of mystery thrown in, then take a look at this one. This one probably interested me the most...
Shin Ishu Kakutou Taisen - Man vs beast, which would win? Well, if you want to find out who is the strongest, then this manga may be the one for you. The premise seems a bit silly, but since it's going strong at 10 volumes now, it might be wise to take a look.