Like us on Facebook, follow us on Twitter! Check out our new tumblr page. :)
Manga News: Toriko has come to an end; but be sure to swing by and share your favourite moments from the series!
Manhwa & Manhua News: Check out the new Manhwa and Manhua shout-out (March 2016).
Event News: One Piece Awardshas concluded. Check the results Here!
MangaHelpers > News > Shout-Outs > New Manga Shout Out: 10/6/14 - 10/12/14
Homepage
Details
Archives

Welcome to the next New Manga Shout Out. This weekly article introduces you to manga that are new and/or have not been scanlated yet. This week features a bullied girl seeking revenge, a maid from hell and a new demon king. Remember, if you like any of the series, favorite them. Don't forget to also thank the various people who feed your manga addiction. ^_^ Translators and Scanlators, please check out these series and see if you can spread some more manga love~ 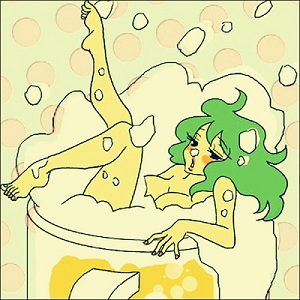 Memento Mori is a little bar with a small set of regular customers. They're all downtrodden by life, which is why they turn to beer for comfort. Among them now is a large-breasted woman, Awako, who has a great love for beer and a tendency to undress when drunk. This comedy shows the nightly antics of Memento Mori's master and his quirky customers. 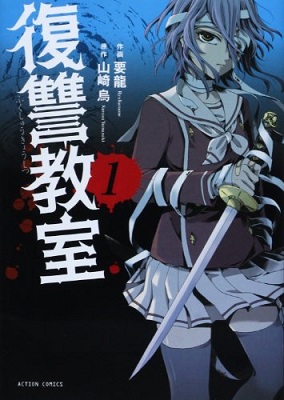 Fujisawa Ayana was horribly bullied at school. At first, she tried to defend herself, but she soon learned to just stay quiet and wait for the pain to end. However, the bullying escalated one day, when someone pushed her into traffic. At the hospital, as she recovered, she suddenly realized that even if she didn't fight back, her classmates were probably going to eventually kill her.

From this realization, she soon decided that the only path left was for her to take revenge. Her new plan included the students who bullied her, those who stood aside and laughed, and those who did nothing to make it stop. She began gathering notes on her classmates, planning exactly what she could do to make each of their lives collapse. While some of the students really seemed to deserve their fate, her plan also included classmates that she used to count as close friends... 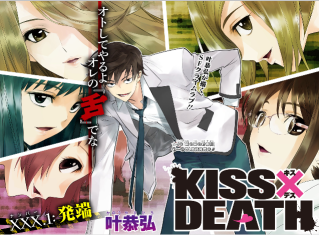 From the perspective of an alien planet with super-advanced technology and tiny (1/60th the size of a human) inhabitants, planet Earth was the perfect location to banish their worst criminals. Five of said criminals were sent to the planet to be exiled, attached to little critters like frogs and rabbits so they can never be fully active. Due to an accident, these five criminals managed to escape and attach themselves to five different girls that were nearby. The one responsible for the banishment of these five criminals now must detach them from the girls by mouth-to-mouth release. 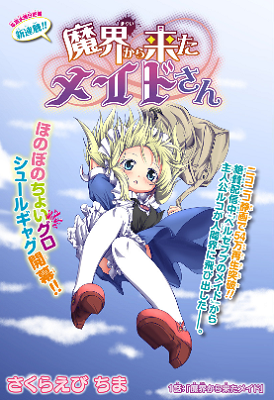 It was a normal Saturday morning, or so he thought. Going outside to get some sunlight, he found a girl covered in blood on his front yard. She introduces herself as a maid from hell, sent to the Earth realm to serve for Kazuma. Kazuma will now have to live with the maid from hell, Luko, and continue a comedic and slightly grotesque life with his new maid. 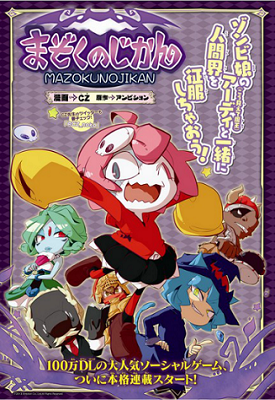 The magical world of monsters has lost their fight with the humans, and they've since been leaderless. Then, they voted for a new ruler, the zombie Addy. Addy may not be the fighting type, but with help from her butler and the sorceress who summons her first small 'army' of monsters, she'll do her best to fight the humans! This comedic 4-koma follows Addy's life as she takes on her new role as the demon king. 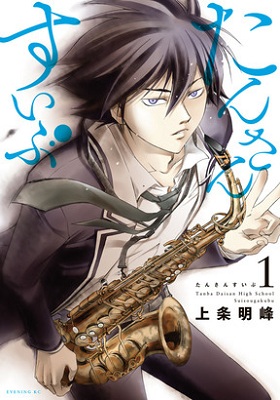 Ever since he was young, Shintaro was gifted with absolute pitch and an ability to "make friends" with any instrument. Now that he joins the ranks of high school, he will now have to decide which club to join. Will he be able to face his past and join the school's legendary band, or will he reject his own talents and continue his hate towards his brother?

=======================================================
Note to all scanlators: If you recently started scanlating a new manga series (with about 5 or less chapters released) and would like your manga to be shouted out in the next New Manga Shout Out, then please PM me. Please include:
This is what tethysdust said this week:
Quote:
My favorite this week was Fukushuu Kyoushitsu. Ayana's plans are so carefully detailed to each of her targets. It's not always just violence, either (though some people do die). She's very good at finding the weak spot in their lives that she can use to ruin them. I get the feeling that this situation is not going to end particularly well for Ayana, but I think she knew that from the beginning, anyway. Mazoku Jikan is fun for anyone looking for an absurd-humor 4koma. Bijou Senka was a bit weird to me (also, I'm not really a fan of handwritten manga).

My opinion:
Bijou Senka - If you're more into the slice of genre with some ecchiness thrown in, then you should check out this manga.
Fukushuu Kyoushitsu - If you're in the mood for horror and revenge, then this may be the manga for you. I'm probably most interested in this manga of the bunch.
Kiss x Death - If you're a fan of Mx0, Pretty face and other manga from this Shounen Jump vet, which once again features ecchiness in school settings, then you should take a look at this manga instead.
Makai kara Kita Maid-san - If you like comedies, and maids from hell, then you should check this manga out.
Mazoku no Jikan - This features another comedy manga, but now from the perspective of a demon king. If this sounds interesting, then you take a look at this manga.
Tansansuibu - If you're interested in music, then this may pique your interest...

[Permalink]
Really nice seinen picks this week :3 I recommend "Kiss x Death", a bit weird but really funny and the design and art are awesome.