Like us on Facebook, follow us on Twitter! Check out our new tumblr page. :)
Manga News: Toriko has come to an end; but be sure to swing by and share your favourite moments from the series!
Manhwa & Manhua News: Check out the new Manhwa and Manhua shout-out (March 2016).
Event News: One Piece Awardshas concluded. Check the results Here!
MangaHelpers > News > Shout-Outs > New Manga Shout Out: 4/23/12 - 4/29/12
Homepage
Details
Archives

Welcome to the next New Manga Shout Out. With the no-raws/scans rule on MH, you have to work a bit to find these mangas. This week features the cosmetics industry, a girl Oda Nobunaga, and a high school detective. Remember, if you like any of the series, favorite them. Don't forget to also thank the various people who feed your manga addiction. ^_^ Translators and Scanlators, please check out these series and see if you can spread some more manga love~ 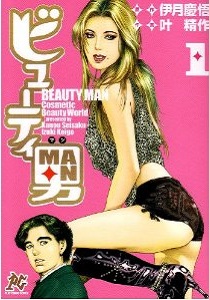 The female cosmetics industry is naturally dominated by women and Aura Cosmetics is no exception. The sales department consists only of young beautiful women and is the place where the few male employees in the company want to be. Unryu Toichiro is a new graduate who surprisingly gets placed into sales. He has a unique talent where his sense of smell becomes incredibly sensitive, as much as a dog, after he drinks alcohol. As he tries to learn the methods of becoming a great salesman, his co-workers slowly start to learn secrets that Toichiro doesn’t want them to know. 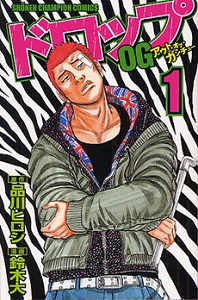 Shinogawa Hiroshi dropped out of school after being inspired by delinquents like Iguchi Tatsuya who live by their own rules and who speaks with his fists if anyone opposes him. He spends his days hanging out with other hoodlums, but Hiroshi is all mouth and if he gets into a fight, his ass is easily handed to him. However, this close group of friends, including Tatsuya, are there to protect him when his big mouth gets him in real trouble. However, there seems to be a storm gathering within the gangs of the city and Hiroshi and his crew might be caught in the middle of it! 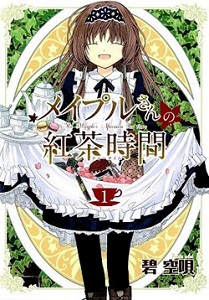 The story opens several years after a devastating war, where incredibly strong 'mechanical dolls' slaughtered many, many people. These robot weapons, which look exactly like humans, are still feared and hated. During a storm, Kuro finds one of these 'dolls.' She is nothing like the weapon he would expect, but is instead gentle, cheerful, and very eager to be of use to the people around her. She claims her name is Mayple, and she seems to be programmed as a maid and cook.

Soon, Kuro has set up a cafe for Mayple to run, where she can cook sweets and tea for everyone in town. It's going to be a rough road ahead of her, as many townspeople hate her on principle and will not shrink from violence against her. But maybe Mayple, who always keeps a sunny attitude, will be able to find a way through the prejudice and make a place for herself in the post-war world. 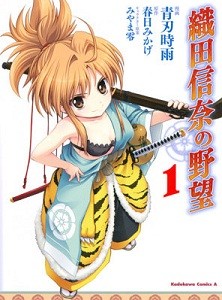 Suddenly finding himself in the Sengoku era, regular high school student Sagara Yoshiharu is about to be killed in the battlefield. He is saved by none other than the man who later becomes the infamous Toyotomi Hideyoshi but at a cost to his life. With history completely changed because of Yoshiharu’s actions, he tries to make things right again but it seems that history is taking a different course than the one he learned in school. Oda Nobunaga is now a brilliant but young girl named Oda Nobuna. Yoshiharu starts working under her command to bring back history to its correct course and find his way back home to the present world. 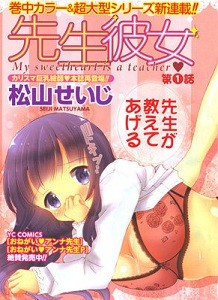 Living on a small island far off the mainland of Japan, Izumo Seto grew up in a small community where the total number of kids from elementary to high school is under a hundred. Not only that, with such close quarters and a tight knit community, word travels fast and everyone knows everything about everyone else, except for one thing: that Seto is going out with the hot new teacher, Ms. Kamome. She came to the island 3 months ago as a new teacher and they fell for each other. But to keep their forbidden love a secret and to throw off everyone else, she is intentionally cruel to Seto in public. But when no one is looking, she melts all over him. 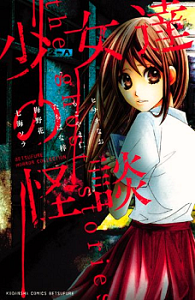 A collection of five spooky stories:

1) Tenchi Shinmei: Asuna Shio is a teenage girl with a very strong perception of the spirit world and has a shrineless god as a companion. One day, Shio's classmate is seen vanishing into a mirror. She reappears afterward, but seems changed for the worse in terms of personality. What has happened to her?

2) Gekkouchou ~Hyaku-nen no Koi~: A two-tailed tiger-striped cat is taken in by a girl called Mitsu and given the name Torakichi. Torakichi is no ordinary cat, and the love and tragedy between them may be strong enough to transcend a simple lifetime.

3) Friend Doll: Mizuno Sachi spends almost all of her time studying, thanks to her demanding parents, and she doesn't really have friends. There's a boy she likes at school, but it seems impossible to get close to him. Suddenly, her stuffed bunny, Mimi, starts showing up in her dreams to advise her through her teenage life. But what is Mimi's motivation for all this help?

4) Tonari no Yomi-san: There's an urban legend about a girl who killed herself as a teenager, "Yomi-san," due to her insecurity over her appearance. Supposedly, her father stuffed her body, and, in her quest to become beautiful, the body seeks to take parts from pretty girls. At one school, several pretty girls have been mysteriously injured. Could the culprit be the dead girl, Yomi-san?

5) Oni no Sumu Shima: Saki moves out to a rural area, where she has no friends. In her loneliness, she goes out to an uninhabited island, where she meets a new possible friend. He's a demon, but as Saki gets to know him, she finds him less and less frightening... 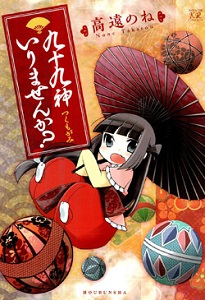 A tsukumo-gami is an artifact spirit, which comes into being for very old, and cherished objects. One day, a tsukumo-gami--later named Kyou--is born from an old mirror. Although she remains close to her mirror, she has the physical, movable body of a tiny, dark-haired girl. As she explores the world around her, she makes her first friend, a mouse!

Soon her mirror is bought by a girl who can actually see and speak with her, though she professes to have no particular interest in tsukumo-gami. In that way, Kyou and her mouse friend come to their new home, which is a store. Soon she finds another friend in the worker Akane, a girl who can't see her, but who finds her fascinating nonetheless. As Kyou's horizons expand, thanks in a large part to her discovering that she can travel through mirrors, she meets other new spirits and people! 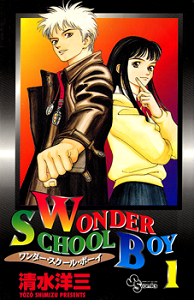 Tsubaki Tenji seems like a normal high school boy, but at night he secretly works as a detective! Though he pretends to be kind of dim and clumsy at school, he's very physically skilled, and he fights using 500 yen coins as projectiles. However, he's not working just because he wants to-- he's got to pay off his vanished father's ridiculously large debt. He works for the Muroto Investigative Agency, under Muroto Shino, and alongside Shino's teenage sister, Yuki. He's always sleepy during the day from working at night, but if the school finds out the truth he could end up expelled.

Unfortunately, his classmate Tachibana Kirin caught on to his act. She finds Tenji's true skills to be incredibly cool, and his work to be very exciting. As the price for her silence, she convinces the group to take her on as Tenji's assistant detective. Now she and Tenji are in this dangerous business together!

=======================================================
Note to all scanlators: If you recently started scanlating a new manga series (with about 5 or less chapters released) and would like your manga to be shouted out in the next New Manga Shout Out, then please PM me. Please include:
This is what tethysdust said this week:
Quote:
There were some nice manga this week. Shoujotachi no Kaidan was a good collection of stories, some of which were cute and some of which were disturbingly creepy. Mayple-san no Koucha Jikan was nothing like I expected. It actually seems to be a pretty serious story, and I'd be interested to see how it develops in the future. Tsukumo-gami Irimasenka was pretty cute, and School Wonder boy looks like it will continue to have some fun action sequences.
Here's what vyc had to say:
Quote:
Oda Nobuna no Yabou - historical comedy series of what if all the historical generals in the feudal era of japan were cute girls. Easy read with a general storyline following the actual historical events.

Drop Og - Hoodlums in street fights sorta series. The main character isnt the one really strong in fights, in fact, one of the weaker ones in the whole story but uses different sort of skills to survive in the plot.
My opinion:
Not much really popped out at me, although I might be most interested in checking outMayple-san no Koucha Jikan. It might be interesting to see how a doll designed for war, deals with the hatred around her.


If you haven't done so already, check out the scanlations of the mangas from previous shout outs which have been recently scanlated: sci-fi school life comedy Intel Senpai (MH link), romantic comedy Golden Time (MH link).