Like us on Facebook, follow us on Twitter! Check out our new tumblr page. :)
Manga News: Toriko has come to an end; but be sure to swing by and share your favourite moments from the series!
Manhwa & Manhua News: Check out the new Manhwa and Manhua shout-out (March 2016).
Event News: One Piece Awardshas concluded. Check the results Here!
MangaHelpers > News > Shout-Outs > New Manga Shout Out: 11/25/13 - 12/1/13
Homepage
Details
Archives

Welcome to the next New Manga Shout Out. This weekly article introduces you to manga that are new and/or have not been scanlated yet. This week features twins out to beat someone in rugby, a demon king as a love cupid and a naked man "stuffed animal." Remember, if you like any of the series, favorite them. Don't forget to also thank the various people who feed your manga addiction. ^_^ Translators and Scanlators, please check out these series and see if you can spread some more manga love~ 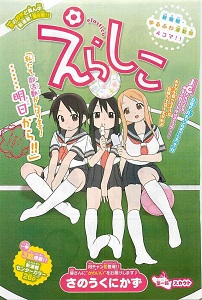 This is a lighthearted 4koma manga about a small Futsal (indoor soccer) club at a certain high school. Three girls attempt to keep this club alive while practicing a little and finding other club members. Will they be able to find 2 other members to keep the club alive? 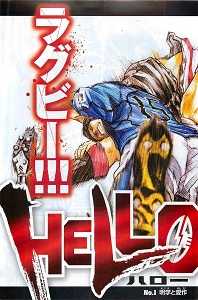 Twins Aisaku and Asuma could not be any more different from each other. Not only do they not look alike, but their personalities are the polar opposites. While Aisaku's sole purpose in life revolves around making friends and not doing any school work, Asuma considers everyone around him as rivals, only in his way from becoming number one in every competition. Due to their extreme differences, each find the other repulsive and pathetic. 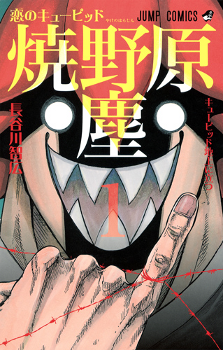 Yakenohara Jin was a force of destruction in the war of a magical realm, and he became the demon king. However, he soon decided that his path was in a different direction; he wanted to go to the human world and act as a love cupid! After all, who wouldn't want to confide their troubles in love with a huge, violent demon creature? Jin's first case is that of teen Yoshimaru and the girl he likes, Hanai Yuriko. 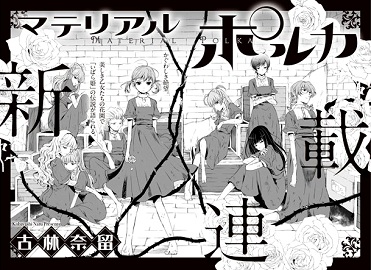 Alice and Ruka are heading to an exclusive girl's boarding school together! They realize they may be in over their heads when they arrive at the opening ceremony, where they see that there are markedly less students in each increasing year. Their school dreams turn to nightmares when the ceremony concludes with the student council president executing a student for wearing a slightly too short skirt. Her shattered head explodes into sweets. One thing follows another on that terrifying first day and night, as friendships are betrayed, new allies are found, and Alice obtains a mysterious chainsaw named "Ibara-hime." Will Alice be able to survive her new school life? 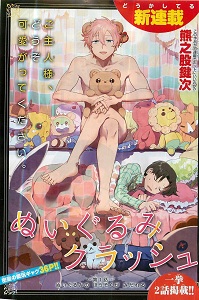 Fuwa Wataru is a high school age boy who loves cute stuff like stuffed animals. He's at an arcade one day, trying to win a cute new stuffed bear, when bullies show up to torment him. In fleeing from them, he happens across a very special toy-catching game---one that has a naked man in it. The man calls himself "Mofu-tarou" (after the name of the stuffed bear) and insists that he is a stuffed animal. He does seem to have genuine stuffed animal ears and a tail, at least. He follows Wataru home, determined to be his new stuffed animal. Wataru's life gets even weirder as his Mumu-tan stuffed bear starts talking, and he has to figure out how to hide his new Mofu-tarou "stuffed animal."

Thanks go to tethydust for the summary. 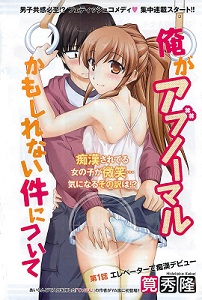 He found out that his ex-girlfriend has been cheating on him by accidentally finding her with another guy out in public. Why did she cheat on him? Apparently, his sex is boring to her. 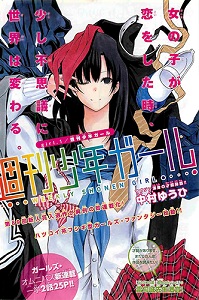 Each of this manga's chapters features a new girl. The first chapter starts out with Ichikawa, who mysteriously has a shounen manga show up on her torso each week, a malady she shares with her male classmate, manga-fan Aoi. The second girl, Kawamura, notices that a boy in her class is suddenly being duplicated!

=======================================================
Note to all scanlators: If you recently started scanlating a new manga series (with about 5 or less chapters released) and would like your manga to be shouted out in the next New Manga Shout Out, then please PM me. Please include:
This is what tethysdust said this week:
Quote:
Surprisingly, Koi no Cupid was probably my favorite of the week. The premise is ridiculous, and that pretty much tells you what to expect, but I thought the execution of it was very cute. Material Polka and Nuigurumi Kurasshu were both extremely strange--a little too weird for me. Shuukan Shounen Girl seems kind of like each chapter will be like a short story (though slightly connected to the previous chapters). I'm not sure how long they can keep up having a new girl featured every week, though.
Here's what DrCoke had to say:
Quote:
If you like sports mangas that rely on a ratio of about 7:3 for sports and comedy, "Hello" might fit your needs. It starts out a bit slow, but stick with it for at least 3 or 4 chapters to get to the good bits.

My opinion:
I hope those who celebrated Thanksgiving had a good one and didn't eat too much. As for the manga,
Erashiko - seems like it'd be a light hearted slice of life comedy; perfect for those wanting something light to read.
Hello!! - looks good for those into sports and competition.
Koi no Cupid Yakenohara Jin - this one sounds the most interesting yet silly. However, since it's in Jump, it'll probably get cancelled soon...
Material Polka - sounds like another school survival manga, although with just girls and very strict rules... But it's weird that the killed girl explodes with candy...
Nuigurumi Kurasshu - Why would you allow a naked man go to your house?! And why would the parents allow him to stay?! This manga is perfect for those who like silly manga.
Ore ga Abnormal kamo Shirenai Ken ni Tsuite - perfect for those into ecchi manga, but maybe it'll be educational and explain the porno business instead of just showing the guy doing girls with lots of boob shots, etc...

If you haven't done so already, check out the scanlations of the mangas from previous shout outs which have been recently scanlated: action fantasy Hangyaku no Kagetsukai (MH link).