Like us on Facebook, follow us on Twitter! Check out our new tumblr page. :)
Manga News: Toriko has come to an end; but be sure to swing by and share your favourite moments from the series!
Manhwa & Manhua News: Check out the new Manhwa and Manhua shout-out (March 2016).
Event News: One Piece Awardshas concluded. Check the results Here!
MangaHelpers > Manga > Browse > Detroit Metal City
Home
Chapters
Translations
Thread
RSS 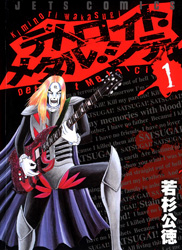 Detroit Metal City is about a death metal band that has gained immense popularity in the indie scene. The main character is a push-over, Negichi Souchi, who is trying to make a living in the music world, but he didn't imagine in his wildest dreams that it would be in such a band. Read and see what hilarious situations he gets himself into.

it rocks so good Permalink " "
Review by Arashi1900

Why i can't read this "manga" in Japanese? Permalink " "