Like us on Facebook, follow us on Twitter! Check out our new tumblr page. :)
Manga News: Toriko has come to an end; but be sure to swing by and share your favourite moments from the series!
Manhwa & Manhua News: Check out the new Manhwa and Manhua shout-out (March 2016).
Event News: One Piece Awardshas concluded. Check the results Here!
MangaHelpers > News > Shout-Outs > New Manga Shout Out: 3/23/15 - 3/29/15
Homepage
Details
Archives

Welcome to the next New Manga Shout Out. This weekly article introduces you to manga that are new and/or have not been scanlated yet. This week features crow monsters, a 16-year-old middle school teacher and a demon king. Remember, if you like any of the series, favorite them. Don't forget to also thank the various people who feed your manga addiction. ^_^ Translators and Scanlators, please check out these series and see if you can spread some more manga love~ 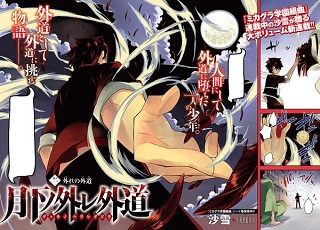 In this world, there are creatures called Gedou, which are murderous crow monsters that come from fallen humans. Since their king was sealed away, they become active only at night, and humanity is able to achieve a daytime-only kind of normal life.

A selfish young brat by the name of Shiramine Miroku lives with his little sister Hifumi and mother, spending his time constantly whining about his mother's attempts to get him to behave and be useful. One day, he accidentally frees the king of the Gedou, sacrificing his mother's life and both his and Hifumi's humanity in the process. Now he is a Gedou, and he has joined an anti-Gedou team called the Rikudou. He is determined to find a way to turn Hifumi, who is now an Oni, back into a human. In the meantime, the Gedou king is on the move, and he also has an interest in Hifumi! 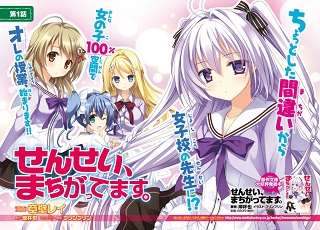 There's a new male teacher at a longstanding all-girls middle and high school! His name is Karato Kentarou, a young man just out of college who has been hired on as a middle school English language tutor. However, he has a big secret. He's not really in his twenties or qualified to be a teacher; he's a 16-year-old boy who missed his high school entrance exams due to unfortunate circumstances, and ended up in this job. He's happy to be surrounded by hot girls near his age who look up to him as a teacher, but things could go very badly if his secret gets out! 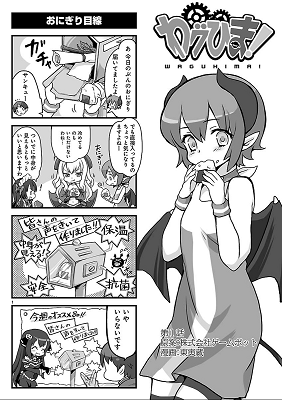 Waguruma appears to be based on the social browser game by Gamepot Inc. The manga includes a continuing story about the comical misadventures of a certain Demon King in a magical world (Waguruma), and a 4-koma section about the daily life of young girls in the same world (Waguhima).

My opinion:
Gekka no Hazure Gedou - If you're in the mood for fantasy action, then you'd like this manga.
Sensei, Machigattemasu. - If you like ecchi manga featuring middle school girls, then this manga is for you.
Waguruma! - If you like 4komas with fantasy, then you should check out this instead.


If you haven't done so already, check out the scanlations of the mangas from previous shout outs which have been recently scanlated: girl's love romance manga Kanojo to Camera to Kanojo no Kisetsu (MH link), horror manga Kyoufu (MH link).