Like us on Facebook, follow us on Twitter! Check out our new tumblr page. :)
Manga News: Toriko has come to an end; but be sure to swing by and share your favourite moments from the series!
Manhwa & Manhua News: Check out the new Manhwa and Manhua shout-out (March 2016).
Event News: One Piece Awardshas concluded. Check the results Here!
MangaHelpers > News > Shout-Outs > New Manga Shout Out: 4/14/14 - 4/20/14
Homepage
Details
Archives

Welcome to the next New Manga Shout Out. This weekly article introduces you to manga that are new and/or have not been scanlated yet. This week features a ship that has all its members disappear, a schizophrenic couple, and demons seeking revenge. Remember, if you like any of the series, favorite them. Don't forget to also thank the various people who feed your manga addiction. ^_^ Translators and Scanlators, please check out these series and see if you can spread some more manga love~ 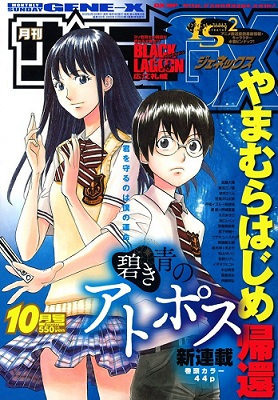 One of the surveillance ships of the company Ferret went missing for some time. Once the ship was found, all 115 members aboard the ship were completely missing. No trace of their existence was found aboard the ship.

Masato's sister works for Ferret, and he was tasked to bring her supplies for the upcoming work to investigate this mysterious ship that returned without her crew. He meets a beautiful girl named Uto at the company, who also had a brother that worked for Ferret and went missing inside the ship. Now Masato and Uto must embark on a mission to discover the mysteries of the unknown island where the missing crew has been left. 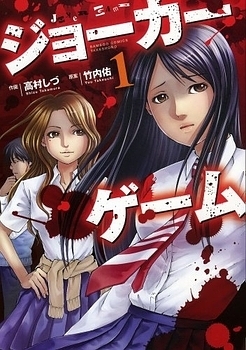 A class is chosen to participate in a special government project, designed to reverse the trend of declining academic ability in the younger generation. They head out together to an unusual school camp. The students know nothing about what the program will entail, and are surprised to find that it involves playing a class-wide game of a modified version of "Old Maid," with the joker as the losing card. There are incredible incentives toward winning the game, but the penalties for losing, or for not playing at all, are correspondingly severe! 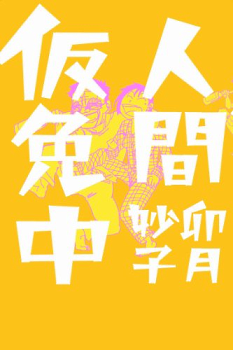 This manga tells the story of Uzuki Taeko, a schizophrenic woman with a difficult past. She falls in love with a much older man named Bobby, and the manga follows their daily life together. 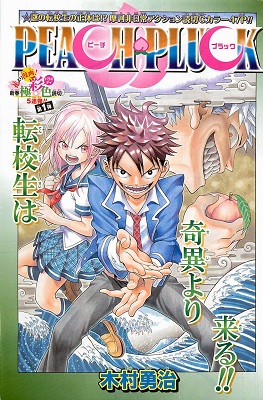 An isolated island is discovered, and its seemingly time-forgotten inhabitants are now being reintroduced into society. However, the truth is that the island was the hidden home of many supernatural creatures, and that it was actually the Onigashima of the legendary demon-fighting, peach-born Momotaro's adventure. Some of these demons seek to take their vengeance on the descendants of Momotaro. The Momotaro descendant, Momomoto Akira, is a middle school girl who reluctantly becomes a friend of one of the transfer students, and then soon becomes a target of the other vengeance-seeking demons!

=======================================================
Note to all scanlators: If you recently started scanlating a new manga series (with about 5 or less chapters released) and would like your manga to be shouted out in the next New Manga Shout Out, then please PM me. Please include:
This is what tethysdust said this week:
Quote:
I liked that Peach Pluck led me to learn the story of Momotaro. The Joker Game appears to also have several related jdramas, but it seems like a very standard premise. Ningen Karimenchuu is an award-nominated manga, so it's probably worth a look. It was pretty interesting, but I'm really not into the art style.

My opinion:
Aoki Ao No Atopos - looks like it might be an interesting mystery of how all those people disappeared...
Joker Game - If you like horror, then you might want to check this one out, although the game and school aspect isn't something new...
Ningen Karimenchuu - If you're in the mood for a more slice of life/drama type manga, then this may be for you. Following a couple with a person that suffers from schizophrenia is definitely different. I'd probably want to check this one out.
Peach Pluck - This one is more fantasy/comedy based and just a one-shot, so if you're looking for something short, then you should check this one out. Plus, it's translated by BDR, so it's gotta be worth checking out~ :) The drawing style kind of reminds me of Fairy tail...


If you haven't done so already, check out the scanlations of the mangas from previous shout outs which have been recently scanlated: ecchi comedy Youkai Shoujo - Monsuga (MH link).

8 members and 4 guests have thanked c_k for this news

[Permalink]
Aoki Ao no Atopos isn't Shounen, it's part of the Seinen demographics.