Like us on Facebook, follow us on Twitter! Check out our new tumblr page. :)
Manga News: Toriko has come to an end; but be sure to swing by and share your favourite moments from the series!
Manhwa & Manhua News: Check out the new Manhwa and Manhua shout-out (March 2016).
Event News: One Piece Awardshas concluded. Check the results Here!
MangaHelpers > News > Shout-Outs > New Manga Shout Out: 9/17/12 - 9/23/12
Homepage
Details
Archives

Welcome to the next New Manga Shout Out. With the no-raws/scans rule on MH, you have to work a bit to find these mangas. This week features kids becoming middle schoolers, a program used to murder people and a woman with daddy issues. Remember, if you like any of the series, favorite them. Don't forget to also thank the various people who feed your manga addiction. ^_^ Translators and Scanlators, please check out these series and see if you can spread some more manga love~ 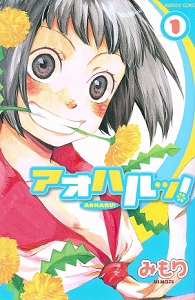 Nijou Hanabi (girl) and Natori Idzumi (boy) are headed for their first day of middle school. Hanabi and Idzumi have spent most of their lives together; their parents were neighbors and close friends, they've learned kendo together, they've always been in the same classes at school and were even seated near one another. When their homeroom teacher tells them that middle school will be different from elementary school, Hanabi can't really see it at first. She's seated next to Idzumi, as always, and they are still as close as ever. The two of them begin to meet new friends and acquaintances, and they, along with their new friend Homare, join the kendo club. However, Homare and Hanabi are the first and only females in the club, so they get a bit more attention than they would have expected. From their first club meeting, Hanabi's life begins to be more complicated, as barely understood jealousies begin creeping into her relationship with Idzumi. It seems that becoming a teenager is going to be very different than being a child! 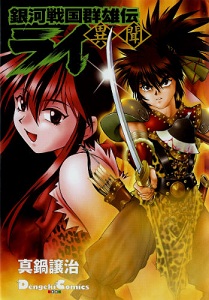 This is a manga related to the manga "Ginga Sengoku Gunyuuden Rai," in which Ryuga Rai was a hero of the period after the collapse of the Sacred Galaxy Empire. In this story, Rai has now forged a new empire, and has ushered in an era of peace. With his Empress Reila, he has heirs to continue his legacy. However, a group of pirates has been threatening the peace of the empire. This group of pirates is led by a powerful young man who claims to be the child of Masamune, and who has been raised by barbarians. The young pirate does not know the identity of his father, but he is determined to exceed him and to bring down the empire. Ryuga Rai must find some way to deal with the situation, both to protect his empire and because he knows that he is actually the young rebel's father... 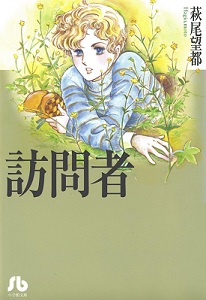 This manga contains four stories: Houmonsha, Castle, Egg Stand, and Angel Mimic. The title story features the earlier life of the character Oscar from the manga "Thomas' Heart." Due to many large and small problems that have added up over the years, Oscar's parents' marriage is collapsing. One day, after a fight that Oscar believes is going to end like all of the others, his father does something irreversible. Now Oscar and his father will have to deal with the consequences. 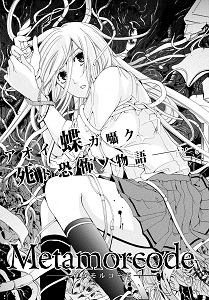 There's been a string of mysterious deaths, where the victims are torn up for no discernible reason. One day, the situation escalates and Homura Kei's computer class of 36 people is slaughtered. Due to Kei's delinquent behavior in skipping class, she ends up as the soul survivor of the massacre. When she goes home that night, a hacker called Yuon comes to her door. He claims to have also lost someone to the mysterious murderer, and he has information that Kei does not. Apparently, someone has created a program that can affect humans through the image of a blue butterfly on a computer screen, and that someone is using the program to murder people. Kei and Yuon will have to track down the murderer, before whoever it is decides to finish them off! 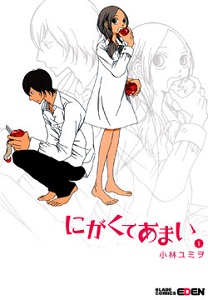 Eda Maki is a beautiful and intelligent woman in her late twenties, who has a highly successful career. Unfortunately, she also has daddy issues, her personality constantly drives off the men she tries to date, and she spends her free time wallowing in her filthy apartment and indulging in unhealthy eating habits. One night, while she is out at a bar lamenting her most recent breakup, she meets a gorgeous 30-year-old man, Katayama Nagisa. When Maki has too much to drink, he takes her home... and proceeds to clean her place and prepare her a delicious vegetarian meal. Maki soon figures out that he is a boy's high school art teacher, and that he has been trying very hard to keep his homosexuality a secret. Soon, she has convinced him to live with her, and their unlikely relationship, revolving around food, has begun!

=======================================================
Note to all scanlators: If you recently started scanlating a new manga series (with about 5 or less chapters released) and would like your manga to be shouted out in the next New Manga Shout Out, then please PM me. Please include:
This is what tethysdust said this week:
Quote:
Metamorcode looked like it could shape up to be a pretty interesting story. It would be quite terrifying if there really were an image that could kill someone just by them seeing it on a computer screen. I also liked Aoharu, which looks like it will be a very cute story of children growing into teenagers in their middle school years.

My opinion:
Metamorcode sounds the most interesting this week~ I'm curious to see how the program makes people get murdered...

If you haven't done so already, check out the scanlations of the mangas from previous shout outs which have been recently scanlated: action comedy Celestial Clothes (MH link), school life sci-fi manga Robotics;Notes (MH link).

9 members and 4 guests have thanked c_k for this news

[Permalink]
Metamorcode looked promising.
Was nice and bloody :)
The author did Who killed Cock Robin before, which was a good read too.